On my way to the concert, I took the opportunity to listen to Tove Styrke’s only album one more time. As I sat on the train and focused on the music, I understood why she has become the shooting star in Swedish pop heaven after her appearance on the talent show Swedish Idol. The reason I think she may have become rather popular is that her type of music is very easy to like. In many ways, playing that type of music is a good thing, but it can also be a curse, when you become just another radio-pop star. However, Tove Styrke’s career has just begun, so it’s kind of harsh to make these assumptions already. Her genre has been called many things: Electronica, Hipster-synth-pop, Eurodisco and so on, and with the success of Swedish Electronica queen, Robyn, that wave is the right one to surf. 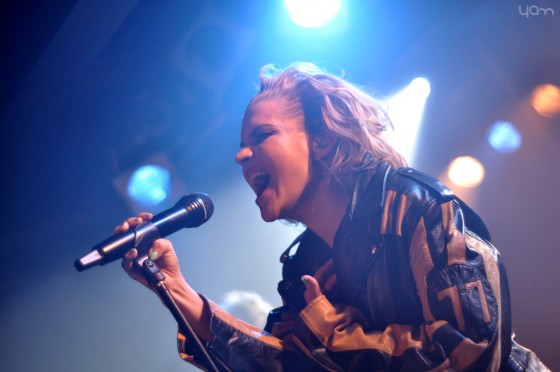 As I entered the small and dark club Debaser, the place was already packed with people. The show had sold out and some unlucky fans without a ticket had to return home. In front of the stage, the Tove Styrke fan club in their signed white T-shirts were waiting anxiously for their idol to take the stage.

She entered the dark and almost foggy stage 15 minutes late, and started the act with a slow song, Beating On A Better Drum. I thought that to be a strange song to start with since you want to get the crowd going. But, you got to give it to her, you can see that she is comfortable on stage and has no intensions of stepping down. During the three songs we photographers were there I got the feeling that this will not be the last time we see this girl on stage.