Swedish Reggae is a genre as unthinkable as German Salsa or something like that. Nevertheless, Kapten Röd (Captain Red in English) is one of the most popular new artists in Sweden right now. Recently he won artist of the year and best live artist during a major radio award gala in Sweden.

This night he and Ribbit Boom Band took the stage in front of a sold out Kägelbanan arena. During the night he performed two concerts — one where people of all ages were welcomed, and later a concert for adults only. The reason for this was simply to give the younger crowd an opportunity to see the show in the otherwise age-restricted nightclub. 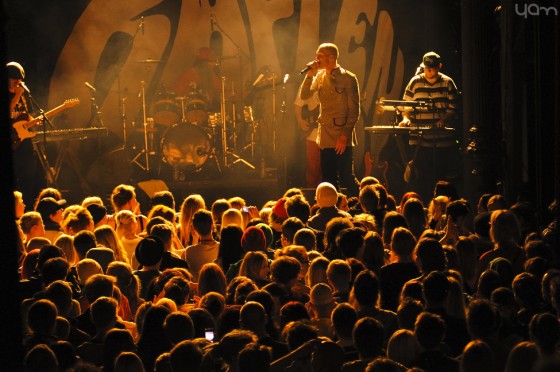 The mood within the young crowd was cheerful before the show. People had arrived early to get as close to their idol as possible. The expectations for the show were sky high, even on my part. And while waiting for the show to start it felt like we were waiting for an international superstar to come bursting out from backstage.

He didn’t burst out, but the reception the crowd gave him was very welcoming. He started off with the song Stjärnor finns här, which can be directly translated to Stars exist here. His often serious but satirical lyrics illuminate social injustices, political issues and standing up for your friends.

In the middle of the show, as he was about to perform his song Bua!, one of Sweden’s most popular Hip-hop personalities, Promoe, entered the stage to backup Kapten Röd and the crowd went wild. The show rose to yet another level. From my point of view, this was the best act of the whole show.

As the last song was sung, the crowd screamed for more. A few songs were played during the encore. As Kapten Röd left to charge his batteries for the next show some couple of hours later, he exited with the sound of happy and thankful fans behind him. What did I think of the show? I’m still amazed of how well he delivers his songs and what an excellent performer he really is. His music is clever and easy to like, and during the cold and dark winter of Sweden, reggae is the perfect cure!