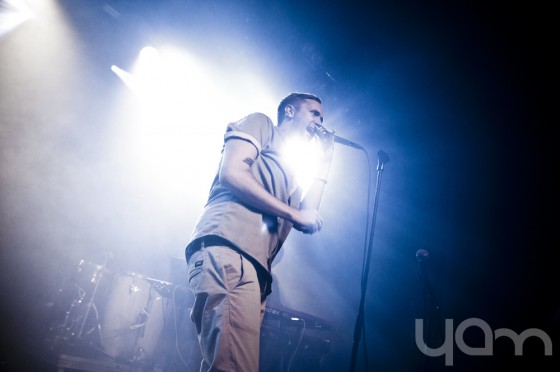 Chords deserves all the attention he can get. Unfortunately he doesn’t get as much of it outside of Sweden. His clever hip hop with loungy sound feels like it is made for an international arena, but I have never seen or heard anything about touring outside of Scandinavia. Chords or Jens Eric Resch Thomason made a name for himself in the Swedish reggae project Helt Off together with Måns Asplund. However, all the while, he recorded his own music as the artist name Chords.  His latest album, Looped State of Mind, was created and produced by himself during his time in the US where he gathered inspiration for the songs, describing the album as his exam project from his time spent in New York.

What I like about this album is that the sound is very fresh and the lyrics are very mature and clever, so when I heard that he was playing in Stockholm, I was stoked and looked forward to the date.

As I entered the relatively small venue Kägelbanan, I was amazed that the place was only about 25% full and the show was going to start any minute. However, 45 minutes later the place filled itself up. Six hundred fans in their 20-30s stood pressed tightly together as the artist took the stage with his band. All that anxiety after waiting about an hour was just blown away, as the venue became a boiling pot of dancing and jumping fans.

He played both songs from Looped State of Mind such as Insomnia and Into the night, but also older songs. I had hoped that his friend Jason Diakité aka. Timbuktu would assist him in the song Insomnia to which he does in the album, but unfortunately he did not.

I did manage to take some nice pictures of the show before I headed home though.