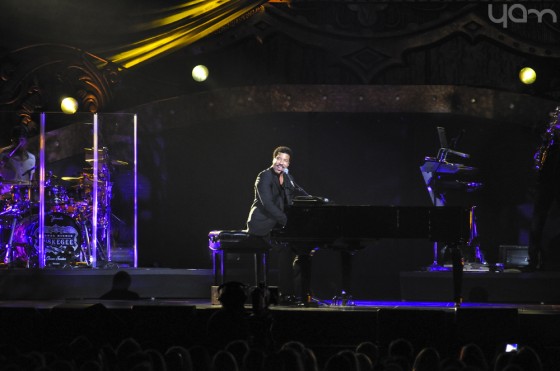 Say what you will, but Lionel Richie is a legend. It’s been almost 37 years since this Soul master released his first album, The Commodores, and he is still releasing albums. He has just released the album Tuskegee (the town in Alabama where he was born), which features duets of his songs together with his friends like Shania Twain, Willie Nelson and Swede Jill Johnson. So, when he dropped by Stockholm on his tour, I had to experience it for myself.

I was kind of disappointed when they told me that we were going to shoot from the mixing table, some 50m from the stage, but like always, you take what you get.

The Globe Arena was half filled with people of all ages. It was a relaxed and calm atmosphere over the arena and it felt like the show was going to be the same. However, ten minutes after the show was about to begin, the arena went dark and Lionel’s band started to play while a cool light show took place. To my surprise, the band started playing the intro to Hello, accompanied by an almost house-sounding remix beat, and I thought to myself, I hope he doesn’t play the song with that house beat. To my satisfaction, he did not; instead he played All Around the World, which was a lot better.

You got to give it to him; he has a lot of energy for a 63-year-old. He used the whole stage and took time for some dancing. After the first song he played Penny Lover sitting at a grand piano, and the mood was crazy cozy.

Since I was only allowed to stay for three songs, I hoped for a hit, and my hopes were not in vain as he started to sing The Commodores‘ smash hit Easy. At that time, I took down my camera and just listened to the song. In secret, I have always thought that the cover by Faith No More is actually better, but Lionel showed me why I should reconsider.

After the song was over the press was led out, and as I read afterwards, he played songs like Dancing on the Ceiling, Three Times a Lady, Endless Love, Hello and All Night Long. I bet the show was worth the rather expensive ticket.