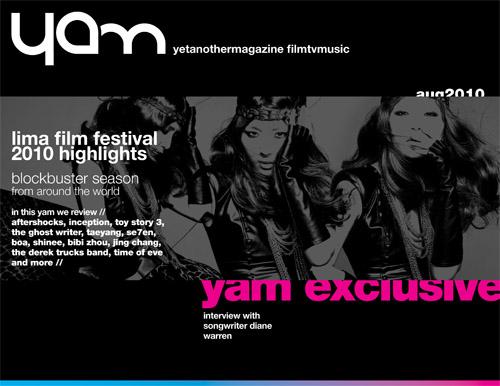 We’ve got our very first exclusive! I got a chance to chat with Grammy/Golden Globe/Academy Award winner/nominee Diane Warren. And besides the fact that I forgot how to talk and think in English, it went pretty well.

We are also covering a bit on the Lima Film Festival, which just wrapped up their 14th edition. Plus reviews for some of the very best of the blockbuster season in America… and a surprise review for Aftershocks, the very first IMAX release made in China.

In the music section we are reviewing our usual Asian suspects, including Taeyang with his solo debut, the boys from SHINee, Bibi Zhou (pictured multiple times on the cover), Jing Chang, The Derek Trucks Band, Macy Gray, and more! Plus, reviews for Bad Guy, Time of Eve, and Yu Aoi’s Uso. pop-up book – which we have ONE COPY to give away.

Details on the giveaway, inside the issue. ;P

Don’t forget to join our Facebook , so YAM can bug you and send you music and stuff.