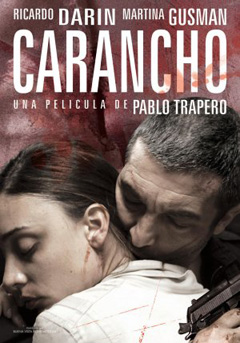 Carancho tells the story of Sosa (Ricardo Darin), a lawyer specialized in traffic accidents in Buenos Aires. Thanks to the corrupt system and insurance companies, he takes advantage of countless family victims of the roads, who end up with none of the money these lawyers keep. One night, while searching for a new client, Sosa ends up meeting Lujan (Martina Gusman), a young ER doctor who keeps herself awake with drugs.

Pablo Trapero’s thriller is filled with loads of good elements, from your sassy young medical student, and a somewhat rough around the edges Sosa and his victim-lawyers-insurance dealings. There’s fraud and brutal beat-ups. However, it all falls apart in the last act. We don’t exactly understand why Lujan would end up willing to give it all up for Sosa, who promises to leave his way of earning a living behind, but we know from the start that it won’t be possible.

In the end, Trapero decides to wrap it all up nicely, but ends up feeling a bit desperate with an over the top rescue mission.