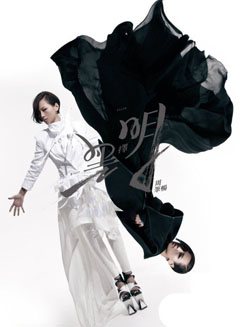 Gold Typhoon is intent on giving their stars a concept of opposites — last year’s The Opposite Me by Jing Chang comes to mind — which seems to work wonders for Bibi. She’s never looked better!

The sound in Black.Choice.White — which is a homonym of Akira Kurosawa’s name in Chinese — marks a distinct path for Bibi. Her sound loses the raw qualities from NOW/WOW, of course, but it combines with the production qualities of Time or i.fish.light.mirror to give us her most cohesive work since her NOW/WOW days.

The White side of the album is supposed to show the “rockier” side of Bibi, which she shows on tracks like Black Apple or, specifically Blind Spot — her strong vocals in that track complement the strength of the song really well. The arrangements of Black.Choice.White are really polished, and you can clearly notice the way Bibi’s voice is evolving as she sounds completely different from one song to the next. For example, in contrast to the strength on Blind Spot, her vocals are soft and delicate on Celibacy, with music by LaLa.

The Black side of the album, on the other hand, is the softer and sultrier side of Bibi, beginning with the velvety Lip Sync, penned by lyricist Yao Ruo Long. On the third track, Chance — so titled from a Xu Zhimo poem (thanks for the tip magicube) and penned by Bibi and music by Khalil Fong — she is at her simplest vocally on the album, reminding us of the old-old-old school Bibi, but the string arrangements seem more complex, with layers of music that never sound too much.

However, the best track from either the Black or White sides has to be Sherlock Holmes. Maybe not lyrically, but the arrangements, as simple as they are — just a piano and some strings accompanying Bibi’s voice, — go amazingly well together. The track also sounds the most like Bibi than any on the album — the tone of her voice so powerful that it could get deep-seeded in your soul.

Then, the grand finale of Black.Choice.White, The Wrong Side of the Moon, penned by lyricist, Tao Le Fei (桃乐妃) and composed by Liu Nuo Qi (刘诺琪). Though the lyrics have nothing to do with what my mind connects it to — at first listen, at least — I think The Wrong Side of the Moon sounds really sexy due to the nearly whispered vocals on the verses. It’s eclectic-sounding like some of her work in her previous album, but with a quality that those songs were missing.

My only true complaint is five tracks per disc seems, well, unfair. But as a whole, Black.Choice.White seems to show Bibi at a comfortable stage in her career, relaxed with her image as an idol and with a broader range in her voice than she’s ever had.

Highlights: Sherlock Holmes, Blind Spot, The Wrong Side of the Moon

Preview on Xiami.com | Like it? Get it on YesAsia: China version | Taiwan version