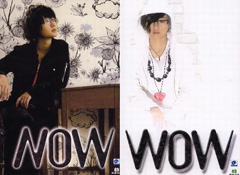 The double album by Zhou Bichang came about after Bibi completed her music studies in California and graduated from the music conservatory in Guangdong. Both NOW and WOW sport very different music styles, and two very different Bibis.

If we take a look at NOW first, it shows a very mellow and R&B-styled Bibi. The album starts with the traditional Liuyang River song, which was re-arranged to mix Li Guyi’s traditional vocals with Bibi’s deeper voice — I know traditional Chinese vocals aren’t for everyone, but don’t be turned off by the beginning and listen to it all. The song is a fine fusion of Chinese music with R&B with beautiful vocals and instrumentalization.

The album continues with strong pop ballads with R&B hints throughout, getting to an R&B peak with Believe in Love with top-notch vocals and composition. The song City of Angels, penned by Francis Lee (李焯雄) and composed by Kubert Leung (梁翹柏) about Zhou’s time in L.A., is a good song, but it feels weird that it wasn’t written by Zhou herself, considering the theme.

The album then continues with the overall style of the whole album, with particularly strong and slightly deeper vocals by Zhou in Love is Hard, sung with such passion it’s almost painful. The album ends on the highest note with The Future is Now, written with Francis Lee and composed by Zhou for the 2008 Beijing Olympics — an inspiring song about standing up to the challenge.

However, what is so ambitious about this double album release is WOW.

The album contains a completely different side of Zhou, including very different vocals — even image style — and arrangements. Songs like WOW, or No Rest for the Whole Year are loud, fresh, different, and quite rocking without sounding pop rock. As far as lyrics go, they go completely over my head with songs like Silly Genius or Cat’s Adventure. But they sound out of this world.

The song Repeat is a curiosity. Lasting a bit over three minutes, it contains fewer than 30 Chinese characters, repeating many of them through the verses and chorus. After the breath of fresh air, WOW continues with Just to Meet You, possibly the simplest song on the album handled with such delicacy in vocal arrangements and simple guitars that breathe new life into regular acoustic love songs.

The dual project of NOW and WOW is a tremendously ambitious one that explores sounds not only within the Chinese music genres like in NOW, but also pushes the pop music barriers with an album that is daring, fresh, and sounds like nothing that’s on the market… even after years of its release.