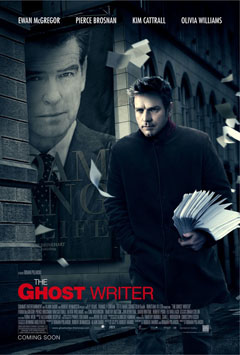 Directed by Roman Polanski — you know, the one he did before all his melodrama — based on the novel and script adaptation by Robert Harris, The Ghost Writer tells the story of a ghost writer (Ewan McGregor) — referred to often as The Ghost — who gets hired by the former British Prime Minister, Adam Lang (Pierce Brosnan) — following his wife Ruth’s (Olivia Williams) advice — to help him write his memoirs after the previous Ghost was found dead.

As The Ghost gets shipped to a secluded location for a month-long period with a $250K deal, he discovers things about the past that could jeopardize his life. “It’s all in the beginnings,” they said.

I’m not gonna say that the ending blew me away, but it felt so satisfactory for some reason that I couldn’t help but leave the theater eerily content. Perhaps it was the performances, which made me think I had seen a great film, because let me tell you, Olivia Williams should at least be nominated for Best Supporting Actress in the upcoming Award season.

The film is rather simple, you know what you’re supposed to find out, and when you find it you know that there should be something else behind that. When you finally get there, you don’t feel cheated or roll your eyes just because of what was on screen. There are hints of drama and hints of thriller… there are even hints of a mild action film and some comedy.

Once again, I need to see Williams getting really famous after this. Please.