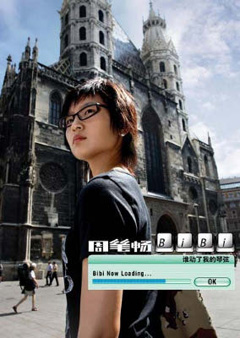 The album opens with Phone Number (Hao Ma), a power ballad about a person meeting another through a wrong phone call — which is what the film The 601st Phone Call is about — and continues with the full of regret ballad Don’t Love me, Like Loving a Friend, penned by Taiwanese R&B rocker David Tao — one of Bibi’s musical influences.

It is in track 3, Hello! Hello! (or Hey! Hey!), when the album takes a turn, shifts energies and focuses on rhythm more than lyrics, but what a sound! It’s like a really charged rocking r&b pop, a sound that Bibi would later on experiment with more.

Track 4, which gives the album its title, is a zhongguo feng (Chinese-styled) ballad with R&B flare using a five-note scale typically used in Chinese folk music, and showcases Zhou’s voice and style range. While track 5 That One, That One, as well as track 6 Poisonous Mushroom continue Bibi’s experimental rocking rhythm and blues pop sound, with the latter being more influenced by R&B.

It is on the seventh track, Silence, where the album loses something. The song isn’t necessarily bad, but it sounds more like a regular ballad… even with Bibi’s quite soulful voice. The album seems to get back on track with Kite, another rocking rhythm and blues pop song; however, Who Touched my Violin String reaches its lowest point with the Europop sounding Deserted Island, which feels like it would have fit the album better at the end, instead of right before the sweet pop sounding ballad The Girl with Glasses.

Preview on Xiami.com | Like it? Buy the album on YesAsia.com | HMV HK | iTunes