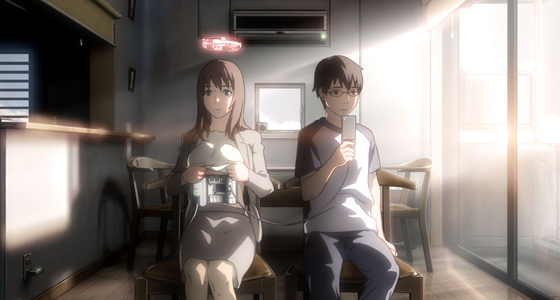 Otherwise known as IVU no Jikan (Eve no Jikan), this tells the story of the fictional future of Japan, in which human-looking robots with top-notch artificial intelligence will be common place. Because of this, an Ethics Committee has been established to make the distinctions between humans and robots more noticeable. Robots follow the three laws of robotics, and when they break them, robots must be disposed of.

In futuristic Japan, we meet Rikuo, a geeky high school student who finds out that his family’s robot – nicknamed Sammy – has visited a place it has not been instructed to visit. When Rikuo and his friend Masakazu go to find out what that place is, they discover a café called Time of Eve, in which the number one rule is to have humans and robots interact without distinction.

The series of six 15-minute episodes is obviously short, but it accomplishes what 2-hour films can’t sometimes, it introduces you to characters that you will care for, and by the last episode you will feel like the series should be longer.

Time of Eve presents this futuristic Japan in which robots are segregated just because they’re robots. Society must make it clear when someone isn’t human, and robots must always work for their masters. This obviously brought back memories of The Animatrix’s The Second Renaissance shorts, in which robots begin fighting for their rights to end their oppression, but in it we don’t feel emotionally attached to them. In Time of Eve, however, we get to meet them as “parts of families” or as foster parents, even as lovers. It’s just impossible to not be moved by Rikuo’s friend Masakazu’s ultimate realization.

You can watch Time of Eve on CrunchyRoll.