The Fangirly Diary of a Geek Girl: Too late to change the name!

Greetings, fellow fangirls and fanboys! After some days of slow news, things are back to the usual quantity! But most importantly, Ant-Man‘s trailer premiered and Marvel used to opportunity to overload us with new info on this new hero and franchise. But first, here are other news:

Retro Marvel covers! Get your retro Marvel covers! On February, Marvel will have a set of 20 variant covers drawn by Phil Noto, who currently works on the Black Widow comic book, and they look awesome 60s/70s pictures! Here’s a couple of them: 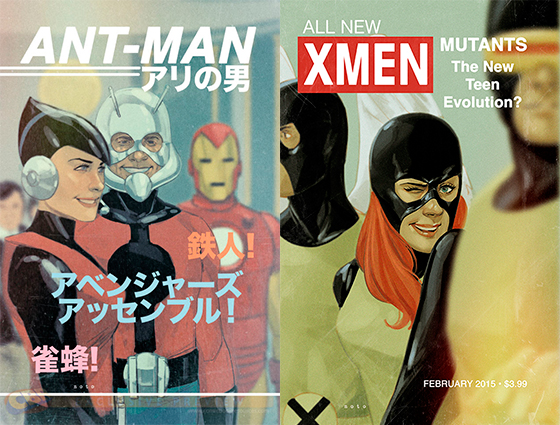 Agent Carter premieres this week and Marvel had the team, including protagonist Hayley Atwell, give interviews to all and sundry! Here she is talking with Entertainment Weekly about how it is for Peggy Carter after the events of Captain America: The First Avenger~

We show the cost of her strength. She’s got her work, and she’s got her private grief, but when they are combined, that’s when it gets dirty for her.

She depends that information on the interview with IGN TV, where she all talks about reprising Peggy’s role in Avengers: Age of Ultron and Ant-Man, as well as the possibility of meeting his future husband in Season One… but specially her role with Jarvis, “her comic sidekick”!

They have this very witty banter back and forth where she’s constantly having to go, “Look, dude, I don’t need your help! I am fine.” But it’s a lovely dynamic between them because they’re both British. They both have that wit and that satire. Their language is a game of chess back and forth. It’s a great game that they play and I think they get tremendous enjoyment out of it. And their relationship grows over the season. They become very close. They also provide the comic relief of the season. You see the serious aspects of what they have to do but then you have these great moments of comedy between them. He becomes like her comic sidekick.

On same awesome ladies theme, Morena Baccarin, who will mostly likely return as Dr. Wells’ A.I. assistant “Gideon” in The Flash, also talked with IGN TV about her her brand new role in Gotham as Dr. Leslie Thompkins~

They’re not sticking too close to the original mythology from the comics. Basically she and Jim meet at Arkham Asylum where he winds up working after the last episode. And they sort of hit it off because they’re both two people who are trying to do the right thing in a city that’s corrupt. And, like him, she’s someone who doesn’t really stand for bulls***. She’s very pragmatic and isn’t fazed by the craziness of Gotham. So they’re pretty drawn to each other and they wind up teaming up.

And in “how come I only hearing about this now” news, apparently there’s a Shaun of the Dead musical live stage production. And it has Edgar Wright and Simon Pegg’s seal of approval!

Box Office News! The Hobbit: The Battle of the Five Armies has passed the $700 million mark worldwide! And the movie has yet to open in China! Get money, shortstuff!

Also, it seems that The Hunger Games: Mockingjay – Part 1 has become North America’s highest grossing film, totally taking Guardians of the Galaxy‘s crown~ They better enjoy it while they can because I don’t think Mockingjay – Part 2 will reach the highest numbers considering they will have to compete with Avengers: Age of Ultron and Star Wars: The Force Awakens.

The 2014 Golden Raspberry Awards’s official nominations are yet to come… but the shortlist has already leaked! Both Teenage Mutant Ninja Turtles and Transformers: Age Of Extinction are nominated for worst movie. Good job, Michael Bay! Yes, I know he didn’t actually direct the first one. No, I don’t care.