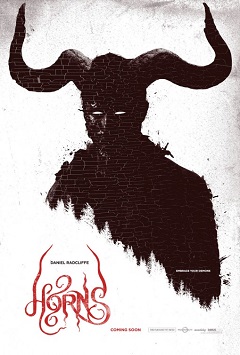 Like Amy said on her Favorite 100 Actors list, Daniel Radcliffe is in a position where he can do anything he wants in regards to his film career. His post-Harry Potter career has been spent in working on independent films for now, and Horns is no exception to that rule.

In the film adaptation of the novel written by Joe Hill (son of Stephen King), Radcliffe stars as Ignatius “Ig” Perrish, whose girlfriend Merrin (Temple) has been recently raped and murdered. While it’s a sad thing for Ig to lose his girlfriend, it’s pretty bad that he’s being accused of commiting the crime and he gets the Nick Dunne treatment [see: Gone Girl]. Only his brother Terry (Anderson) and best friend Lee (Minghella) believe in his innocence because his parents suffer with his presence.

To make matters worse for Ig, one day he wakes up and notices that devil-like horns has sprouted from his forehead. As he tries to get rid of the horns, Ig notices that when he talks to people, they now tell him their darkest urges and/or fantasies thanks to his horns. Figuring how they actually work, Ig is determined to find who really killed Merrin before things take a turn for the worse.

Horns not only explores Ig’s quest to prove his innocence, but we also get to see moments from his past, which helps underlining the film’s plot, developing Ig as a character and understanding how much he loved Merrin: they love each other, listen to music, drink, dress like hippies and fuck at the top of a treehouse. Other parts from his life also explain why Ig’s relationships with some of his childhood friends have changed, and not for the better as seen in present day.

I thought Horns would be just a mere campy and trashy film, but its “whodunit” story is steadily paced and engaging while presenting things that make you wonder about regarding the topics of love, death and betrayal as well as showcasing humor greatly with an uncensored feeling — actually, most of the film’s highlights involves the magic of the horns and Ig’s reactions to everything surrounding him, especially when it comes to Ig confronting his parents and they show their true colors. Speaking of Daniel Radcliffe, he gives one of the strongest performances of his career (which isn’t saying much, but it was still great) despite Ig starting off as a whiney drunk douche. He’s believable in the role and he actually makes Horns interesting and entertaining to watch for the most part. In terms of Radcliffe distancing himself from his eternally famous character, however, Horns doesn’t do him many favors on that regard, especially with Ig’s newfound powers, which includes commanding snakes at his will.

Despite the film having an original feel to it thanks to its dark humor and some of the story’s aspects regarding Merrin, who was played decently by Juno Temple, Horns suffers a lot when it comes to the resolution. We get to learn who is responsible for Merrin’s death, but the confrontations against the murderer pretty much leaves a bad taste on the viewer. The logic regarding Merrin’s cross worked well, but the confrontations made the villain look cartoonish and most of his enemies ended up written to look like stupid characters. It does take away the good feel from Horns‘ strongest elements, sadly.

While still a good film and better than expected considering the genre thanks to Radcliffe’s performance, Horns could have been a lot greater if the final minutes were polished and thought out better.