The Fangirly Diary of a Geek Girl: This star of England, Glamour made his prize

Greetings, my dear geeks! Yes, I start this week by misquoting Shakespeare, and it’s all Hiddles’ fault. But fret not, we have much news on a wide range of subjects. So let us start already!

So Doctor Who‘s Matt Smith actually got to carry the Olympic Torch around Cardiff Bay. I know I said I’d rather have David Tennant do it because CANON! But, I’m glad for the lad. I’m especially glad he didn’t fall on his face, like many feared. Why?

Look, Matt’s lovely, he’s a magnificent, brand new, hilarious, heartbreaking, heroic Doctor — but the fact is, if that man walks into a room with a coffee then it’s only so long before you’re wearing it. No, really, clumsiest man on earth. He walks like he’s in a constant state of surprise at his own limbs. I remember when he turned up at a Worldwide meeting really early on, and the first thing he did was spill a cup of coffee over a rather lovely woman. Naturally she giggled, flushed and introduced her mother. (Ahh, life when you’re Matt ! I accidentally made eye contact with the same woman — she phoned the police and shot me in the face.) On the way out he apologised to a completely different woman for the coffee incident. “That was the wrong woman,” I said, as he went out the doors. “Nope,” he replied, “That was the second cup.”

That was Steven Moffat, talking about how afraid he was about Matt holding a torch for “The Pandorica Opens” episode. And here they were, tempting fate again!

Anyway, the same day, good-old enabler friend showed me this trailer of Exit Humanity, which is basically The Walking Dead during American Civil War. Looks awesome! Check it out.

Bad start, MIB3 took away The Avengers‘ Nº1 spot at the Box Office. It seems the Avengermania is passing… I’ll miss you guys, and I will keep stanning your future movies!

Watched the BAFTAs… Benny didn’t win, but congrats to Andrew Scott! He even cried a bit when he got his award. Also, Matt Smith and Benedict Cumberbatch gave away the special award to Steven Moffat… that was slightly awkward.

Soon after, another friend will send me a link to a podcast, which featured Amanda Abbington, the Sherlock Fandom Queen, where she talks about shipping, fandom and postcards, among other stuff. 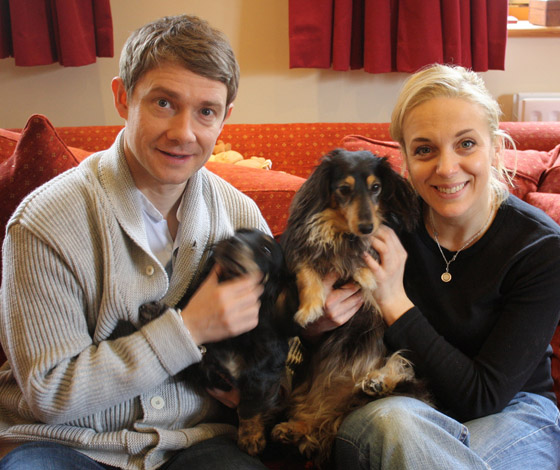