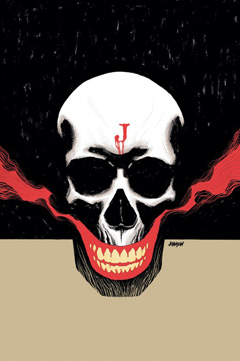 It’s a genius idea. I can’t believe it has never been done before. What if little Bruce Wayne was the one to be killed by Joe Chill, and his father Thomas went on to be Batman? The three issue mini-series Knight of Vengeance answers that question with a story set in an alternate version of the DC universe.

The world of KoV is as seedy and grim as you’d expect from the comic book noir duo of Brian Azarello and artist Eduardo Risso (100 Bullets), and shows how Gotham would be with a killer Batman driven by vengeance as opposed to idealism.

While such darkness toppled Azarello’s overhyped Joker novel into something sadistic for sadism’s sake, here it punches at full force, especially considering just exactly who wears the white make up and grin within this universe. Bruce Wayne’s Joker has always been a nameless mystery, but here we have someone with a name and a back story that shows how a parent’s love can breed a most disquieting kind of madness.

Azarello also pulls us back from the black hole by making the final battle between his Batman and Joker more than just a mere tug of war. It becomes something rather touching and profound. The story does end with death, but not because of a knockout blow or a 20 storey fall. Instead, it’s all down to an ironic punchline, when it’s revealed just how Thomas and Martha’s beloved son would have chosen to ‘live’ his life if he were the one to survive that fateful night.

There is no worse killing joke for a parent it seems.