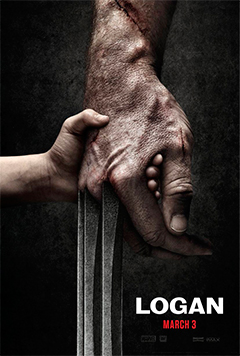 Who would have thought that the newest Wolverine adventure in the X-Men film universe that started so terribly, will finish so great. That said, this isn’t exactly an X-Men movie, or even a superhero movie. This is a modern western road movie, with sci-fi, about a comicbook character, and loosely based in a comicbook story.

Yes, the only thing Logan has in common with Mark Millar’s Old Man Logan, is that Logan is, well, old, and there are hardly any other X-Men or even other mutants around. Logan in fact has more in common with Frank Miller’s Batman: The Dark Knight Returns what with the hero being bitter about past tragedies in a dystopian future, and trying to find redemption while mentoring a young girl.

So what’s this film about? It’s 2029 and the X-Men only exist in comicbooks based on exaggerated stories of the disappeared mutant team. A visibly aged Logan is working as a some sort of UberLUX driver, who uses his gains to illegally buy prescription drugs for a senile Charles Xavier. Yep. One day, a mutant girl called Laura will come into their lives and, through her, learn about this conspiracy from evil corporation Transigen, while they run away in an effort to take her to safety.

Mangold, who also directed The Wolverine, made Logan into the kind of movie that he perhaps couldn’t make in the previous film. Just like The Wolverine, Logan is a character study, and this time he could make it R-rated. While the film has Deadpool to thank for opening the R-rated doors, the rating was completely justified in this film. And it wasn’t just because of the explicit violence either, there were some f-bombs dropped and one pair of boobs. Also, unlike Deadpool, where the violence was mostly “fun” due to Deadpool’s own character and general tone of the movie, here the violence is raw, dramatic and more painful looking.

Hugh Jackman has been playing Logan/Wolverine for almost 20 years, and it’s obvious that he has made this character his own. His performance as an aged Logan, whose mutant powers are obviously not as good as they once were, is fantastic. He’s more bitter than ever and yet his sense of responsibility and his ability to care are still there, even if buried under many years worth of pain, tiredness and loss. Jackman manages to give Logan a nuanced relationship with both Charles and Laura.

Patrick Stewart has also been Charles Xavier/Professor X for a long time, but while Wolverine’s transition into the character we see in Logan is perhaps a logical conclusion if things were to go south; it’s the first time we see Charles Xavier so fragile, betrayed by an aging body and a failing mind. Which can be mighty dangerous for a mind as powerful as his. It’s also weird but appropriate to watch Patrick Stewart’s Professor X curse. Stewart plays him both cantankerous and sweet, and his attitude and vulnerability is very realistic as far as my own experience with nonagenarians is.

Then we have Dafne Keen as Laura Kinney / X-23. She’s a newcomer but she’s not a weak link at all. Girl has perfected The Glare and The Snarl, and her mannerism that are both innocent and feral… which is totally what you would expect for a little girl version of Wolverine raised in a lab. It’s also been a while since Hit-Girl in the Kick-Ass films and we were due another ass-kicking little girl. Dafne has excellent bilingual acting skills too! And that’s something I didn’t expect, how much Spanish was spoken in this movie. Which is to be expected for a movie that starts in Mexico and ends in almost Canada.

As for the other characters, either good or evil, directly involved or “innocent” bystander, they all did an adequate job adding to the drama, but the bulk of the acting goes to the aforementioned three.

The only gripe I might have with the film, it’s that Logan slow downs during the middle road-trip of the film even if it’s lovely to watch them learn to be a family, and while the film was always a slow burn, the beginning and ending have a more modern western style that work better with the slow pacing spiced with action scenes.

Talking about westerns, I did appreciate all the Shane [1] references.

This is the best you’ll ever see Wolverine, and, if it’s the last rodeo of the character (and Professor X), as far as Jackman and Stewart’s characterizations at least, it’s a perfect and well-earned ending.