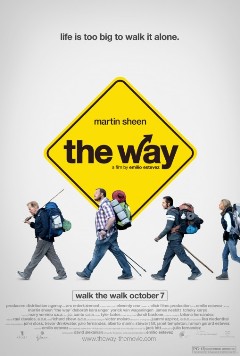 Martin Sheen and Emilio Estevez, father and son, work together to bring The Way to life.

The Way starts with bad news, as Thomas Avery (Sheen) finds out that his son Daniel (Estevez) died while walking the Camino de Santiago pilgrimage route. [Wikipedia] As Tom travels to France to retrieve his son’s body and posessions, it’s during a night of grief that he changes his mind and decides to pay homage to Daniel by finishing what he started: the pilgrimage route, all the way from France to Spain.

Emilio Estevez created a sentimental, atmospheric film that pays homeage to the Camino de Santiago by showcasing what it’s like to do the pilgrimage route, taking advantage of the landscapes, real tourists and Tom’s quest to finish the route. It does have a religious vibe attached to it, but Estevez doesn’t go overboard with it at all. His writing yielded a tailor-made role for his father, who superbly carries the film with his emotions on display for everyone to sympathize with Tom’s suffering and feel uplifted. But at the same time, The Way shares similarities with the likes of Canterbury Tales and The Wizard of Oz in regards to the supporting characters who Tom encounters and bonds with during the pilgrimage — all with their own reasons to travel “El Camino“.

First, there’s Joost (van Wageningen), a Dutchman who wants to lose weight before attending his brother’s wedding. Later, both meet Sarah (Unger), a cynical Canadian who’s trying to quit smoking. Finally, there’s Jack (Nesbitt), the Irish travel writer who suffers from writer’s block and hopes that writing about the Camino will solve his issue. Despite the differences between all four protagonists, they all bond and get along.

There’s a couple of main problems with The Way. Estevez’s writing for Sarah was fine, but the writing for Joost and Jack bordered on stereotypical because he wrote them based on their nationalities and the typical stuff attached to them, resulting in the characters being quite annoying. Also, The Way goes at a very slow pace, which makes the road trip film hard to watch, despite some of the twists Estevez injects into Tom’s pilgrimage route. But even with its faults, I’d say that The Way is alright to watch, at least once, thanks to Martin Sheen’s performance.

One last thing, the film’s ending credits show that it’s dedicated to Emilio’s late grandfather, Francisco. But with Emilio playing the dead son in The Way and Martin Sheen going to rescue his son’s body, it made watching the film a bit strange when this was released in 2011 in other countries around the time Charlie Sheen — Martin’s other son — was going off the rails.