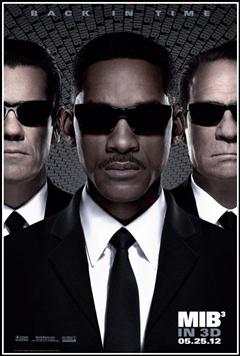 With this installment of the series, the Men In Black must head back to 1969 to stop an alien from setting in motion (yet another) catastrophic event. The time-travel messes with the time-space continuum and present-day K disappears, leaving J to go back in time and partner with young K (Josh Brolin).

The film focuses more on J this time, and gives Will a little (yes a little) more acting room with the character. K is there, but he’s played for the most part, by Josh Brolin instead of Jones, since more of the movie is set in the past than in the future. Brolin does a great job playing the younger version of K. It had to be a challenge to find an actor that could capture the stoic charm of Tommy Lee Jones, and Brolin wasn’t a disappointment. The humor is the best part of this film. It’s not as cheesy or base as it was in MIB2, and I’m grateful for that.

As far as sequels go, MIB III is a hit with me. It has all the charm and history of the first film, but also has enough new material to keep the audience interested. It definitely surpassed expectations, as well as redeemed the franchise after the spectacularly underwhelming second film.

I had a good time with this movie. It was great seeing characters I grew up with, watching them re-capture their essence and just have fun again. While the first Men In Black film was the first movie I ever saw more than once in a theater, I think I’ll wait to re-watch this on DVD. But it was definitely a good time.