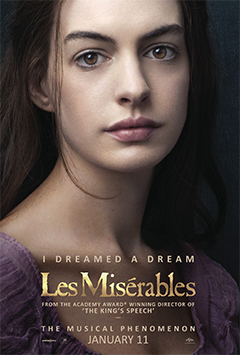 The grand tale begins with Jean Valjean (Jackman), a man finally allowed on parole by inspector Javert (Crowe) after stealing bread twenty years before. Years later, Fantine (Hathaway) is thrown out of her job and must resort to prostitution to help her daughter Cosette (Allen/Seyfried), who is staying with the Thénardier innkeepers (Cohen & Carter).

Valjean, still on the run from Javert, helps her in her time of need and proceeds to ensure that Cosette lives a life without misery. The story reaches the June Rebellion, where Cosette and Valjean are thrown into the action all for the sake of love thanks to Marius (Redmayne). There is far more to this lengthy story than one can sum up in a few words, but it is at heart the tale of Prisoner 24601, whose name is Jean Valjean.

Hope was certainly high for Tom Hooper’s Les Misérables, when we were young and unafraid. Costumes draped in red and black are as lovely as can be, and many songs prove to be as exciting and inspiring as one would have wanted. The live singing works for some and not for others, but the risky move allowed for some spectacular work from those lucky few. While there is plenty of good that comes from Les Misérables, the flood of bad that comes with it is immensely distracting.

Tom Hooper’s heavy-handed and aimless camera work took a toll on the film. His work on The King’s Speech was nowhere near this messy, and it is confusing why he would think this was a good idea here. Considering cast members had their faces mostly off-screen during solo numbers, it’s clear that this is a problem. An abundance of dutch angles and tilts didn’t do much to help either, as they were shamefully out of place throughout most of the film.

As this is the tale of Jean Valjean, one would think a lead man like Hugh Jackman would be spot on, and yet there was something endlessly frustrating about him outside of his fine solo work. Every scene that he and Russell Crowe’s Javert — whose breathy voice was a distraction all in its own — interacted, like in The Confrontation, would have made those school boys wet themselves with tears from laughing. The supporting collection of men, notably Eddie Redmayne and Aaron Tveit, give solid performances as well; the latter with the charm and looks of a young Robert Redford.

The cast is full of some lovely ladies, whose stories are, unfortunately, a little more rushed and cut short than that of the men, but the source material is to blame for that. Anne Hathaway provides the film’s greatest asset in her performance, notably her breathtakingly stripped down I Dreamed A Dream. Seyfried’s Cosette is charming enough, but it is Barks as the only female revolutionary Eponine that leaves you wishing for more after her stellar rendition of On My Own. Some will complain that Helena Bonham Carter and Sacha Baron Cohen’s rendition of Master of the House was too akin to their work for Burton’s Sweeney Todd, but they still do well at delivering the film’s much needed comic relief.

At the end of the day, one wishes that these performances had been placed in the hands of a more qualified filmmaker, but unfortunately life has killed those dreams I dreamed. Les Misérables will certainly ensure you hear the people singing the songs of angry (and sad) men (and women), but there’s a chance you may end up looking down in disappointment.