The Fangirly Diary of a Geek Girl: Playing games with my heart

Greetings, my fellow geeks! NYCC may be over but Marvel’s need to play with my fangirl heart was not. And if that weren’t enough, DC had to go and announce stuff that put all the geeks in a tizzy. But let’s not get ahead of ourselves. Here’s how the week started:

Before the whole stuff from NYCC, let’s start with the usual Doctor Who promo! “Mummy On The Orient Express” was not so good, except for Capaldi who remains flawless; though the old school monster and shootout to certain past episode were cool too. But damn, the writers hate Clara or what? Doctor Who, while still enjoyable, needs new writers! Probably female ones, as Neil Gaiman implies~ Anyway, this week we have “Flatline” and the sole idea of 2D aliens is awesome!

Some time ago I talked about Powers, where Christian Walker (Sharlto Copley) used to be a superpowers but lost them and now is a detective at Powers Division. Together with partner and actual detective Deena Pilgrim (Susan Heyward), he will deal with issues caused by people with superpowers. It is based on a comic by Brian Michael Bendis, and here’s the trailer presented on NYCC:

And then Marvel decided to start playing with us. First, we have great news! The Gwen Stacy version of Spider-Man seen in the critically acclaimed Edge of Spider-Verse #2 will have her own comic with Spider-Gwen #1 in February, 2015.

And then the first hint that the week was not going to be a calm one… there was a new image showing Quicksilver and Scarlet Witch caught in a red-ish spotlight with the words ” No More Mutants” behind them.  “No More Mutants”, like the phrase Scarlet Witch uttered some time ago and resulted in 90% of the mutants losing their powers. Of course, to calm us down they say this story will have more to do with the Avengers titles than the X-Men ones. And yet, it won’t be the last time Marvel started playing with my emotions. 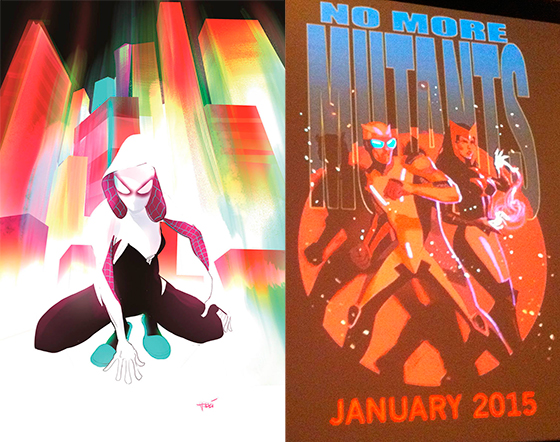 Beside that, we had fairly interesting news about Daredevil! The panel had lot of new info, including the reveal that nope, “neither the role of Jessica Jones nor of Luke Cage has been cast”. Yeah, for now, whatever else we have had heard is just rumor. On the other hand, considering this show will be seen in its entirety on one go at Netflix, there’s no point to cliffhanger… and that’s awesome news to me!

Well, compared to a weekly show – we realized, ending with a cliffhanger is pointless. ‘Oh, what happened?’ and you click a button and find out! So I think more than anything else, it will feel like a 13 hour movie!

Then we had our first piece of concept art depicting Matt Murdock in all his Daredevil-y glory! And soon after that, the official stills! OK, he looks a tad too ninja. And that would be cool for a gritty Iron Fist story or something… but I like Daredevil’s red costume! Guess they are going with the Frank Miller and John Romita Jr’s origin story… as far as fashion goes at least! 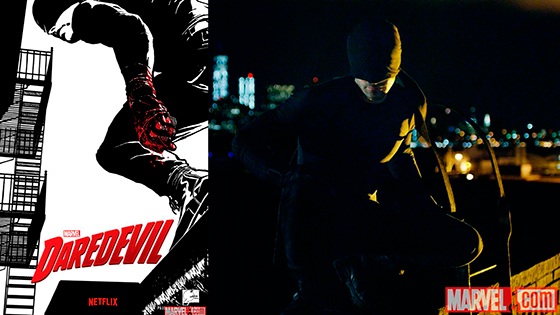 But hey, at least it’s been confirmed by dudes who actually saw the footage at NYCC that they costume is a “work in progress”, so I hopefully will see the red suit before the 13 episodes are over! The footage includes a fight scene where things are dark, sounds are heightened and there’s even a flashback! Then some more clips showing his relationships with more characters as proto-Daredevil and Matt Murdock. So yep, seems pretty awesome so far!

We also got announcements for other actors/characters! And now we know who’s Rosario Dawson playing! Not Elektra or White Tiger, sadly. She’s Claire Temple, “a Nurse who works at Night“, so MCU version of Night Nurse? She had her own clip shown, where she tends (and unmasks) a poor Matt Murdock after Daredevil-ing around.