Book of Life (Animated Film), The 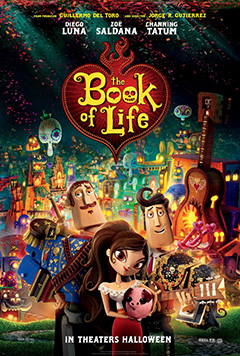 I missed the trailers of The Book of Life when they first were released, which is the main reason I didn’t post any of them on the site. However, as soon as I caught one, I knew I had to watch it. I was dazzled with the colorful and eye-popping art direction and character design, which is a rare thing when -generally- it comes to current (American) CGI animated movies.

Taking the Mexican tradition of Día de los Muertos spliced with the myth of Orpheus and Eurydice with a myriad of bright colors, (some Latin) pop culture references and songs for an increasing ADD crowd, The Book of Life makes us believe that we will be simply following Manolo (Luna), a very Spanish-Mexican Matador thrusting himself into the pits of the underworld to recover his recently-deceased beloved Maria (Saldana, Sandra Echeverría in the Latino dub); however, there’s more than meets the eye.

As the legend in The Book of Life states, La Muerte (aka. Catrina in the dub, voiced in both by Del Castillo) -ruler of the colorful Land of the Remembered- and the cunning Xibalba (Perlman, Miguel Ángel Ghigliazza) -ruler of the Land of the Forgotten- visited the Land of the Living one Day of the Dead where they met a trio: the son of a bullfighting family Manolo with a music passion, and the son of a local hero Joaquin (Tatum), both of whom are in love with the naughty Maria. Tired of the grim Land of the Forgotten, Xibalba makes a wager with Catrina for the ruling of her kingdom, choosing Joaquin as his “champion” to win Maria’s heart while sneaking a magical medal that grants anyone invincibility.

First of all, you can tell I watched the Latino dub… so I’ll probably watch the movie again in its original track when available. I gotta admit that The Book of Life seems to go at 100,000 miles per hour from dialog explaining the cultural reference to kiddie reaction (funny Mariachi insert! Bullfighting clown!) and a Latin pun, though like Instructions Not Included, it also requires heavy bi-cultural background and some bilingual knowledge to actually be able to sing along to Creep, Can’t Help Falling in Love with You and Cielito Lindo (on top of the music cue for Kinky’s Más) among others… but I was expecting a little more from Santaolalla, to be honest. I’ve seen more cohesive mindless masala films that had as much cluster in the story (comedy, love triangles, deaths, explosions, family turmoil and emotional get-togethers, COUNTLESS CHARACTERS) but somehow I ended up addicted to their soundtracks. It brings up the whole star-cast name over people for the job (or in the case of Indian films, perfect lip-sync) issue that Dreamworks (Antz, The Prince of Egypt) and Fox (Anastasia, Titan A.E.) started in the 90s to compete with Disney. I liked Diego’s Manolo, but the singing was cringe-worthy for a character that was supposed to be gifted with music… especially in contrast to Placido Domingo. Heh.

Don’t get me wrong, I enjoyed the film, laughed, but I sensed my theater didn’t laugh as much as I did for that lack of bi-culture pop references. It also didn’t help that some of the songs were kept in English with (not exactly matching) subtitles, which is a common feature in most musicals except Disney’s, who put in the money for massive amounts of dubs. The star of the whole film has to be the art direction by Paul Sullivan and Gutierrez’ (basic) visual concept [1] and character design, which really do carry the whole film despite its screenplay faults. I wish, however, it ended slightly different. I mean, it’s a TRIO, right? But if J.K. Rowling couldn’t do it in the course of seven books, I’m not expecting to see it here.

Extra quarter of a star for art direction and character design.