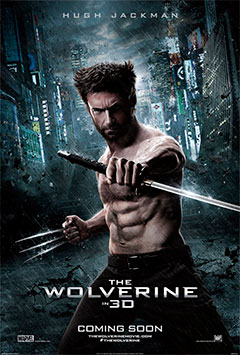 The Wolverine didn’t have to do much to be better than that other Wolverine solo adventure film. And I’m glad to say they went above and beyond their duty.

Unlike X-Men Origins: Wolverine, which was, as its name says, an origin story; The Wolverine is a character study. In this movie, Logan (Jackman) is living all alone and sad in the Canadian wilderness, after the events of X-Men: The Last Stand. He dreams constantly of Jean Grey (Janssen) who keeps giving him vaguely suicidal feelings. One day Yuiko (Fukushima), a mutant who can see people’s deaths, appears and tells him to come to Japan with her as a dying wish of her master. Said master is Yashida (Yamanouchi), whom Logan saved from the Nagasaki bomb during WWII, and now has built a huge technology empire. Turns out Yashida also had ulterior reasons for requesting Logan’s presence. He tells Logan he can take his healing ability and make him “mortal”, and use it for himself. Yashida feels he’s not ready to kick it yet. One thing leds to another, and Logan ends up protecting Yashida’s granddaughter, Mariko (Okamoto); as well as fighting Yakuza, ninjas, an evil lady mutant and what appears to be a robot in the shape of a Samurai armor.

One of the things I liked most about The Wolverine was that Japanese character where actually talking Japanese and not English with a Japanese accent. The only times they spoke English was when communicating with English-speaking characters or the one time two Japanese characters wanted to talk and didn’t want their minions listening on their conversation. And not everything was subtitled in these moments, if one didn’t know Japanese one had to infer what they were talking about from context.

Hugh Jackman, as usual, gives his all when playing Logan/Wolverine. You can clearly see how much he loves the character. The plot of the movie also gives him more acting range. Logan is still sarcastic, but now he is physically and emotionally vulnerable. His interactions with dream Jean Grey are quite poignant and resonate with his guilt. He gets called a ronin in the movie, a Samurai without a master, and it’s appropriate since he’s not with the X-Men. And after the events of The Wolverine, you can see he’s on the right emotional path that could mean he could be an X-Man once more if he wants.

As for the other characters, I was pleasantly surprised that after Logan, the main characters and antagonist were all ladies. Not only that but Yukio and Mariko’s friendship/sisterhood is refreshing and it makes the movie (barely) pass The Bechdel Test the first time they are together onscreen. The antagonist is the mutant Viper (Khodchenkova), and while she looks menacing and sexy, she’s not as developed as the other women. What are her motivations? Money? Power? Evil science? Lulz? But she does the job done of advancing the plot. And all the ladies kicked ass in their own way.

The other important characters besides Yashida, includes Shingen, son of Yashida and father of Mariko; and Harada, Mariko’s former lover and archer ninja. So yes, this movie is a whole rich family affair, and the only “good ones” (and the more interesting characters) are the ladies. As such, the movie feels more intimate and has slow-paced moments despite all the action of Logan slashing and hacking bad guys. It also helps that there are not that many computer generated effects, and the ones that exist look way better than X-Men Origins: Wolverine’s.

Sadly, the third act didn’t pay off as much as one would wish to. And also needed us geeks to suspend disbelief about how healing powers and adamantium work. Despite that, The Wolverine is a solid movie, and you really need to stay for the mid-credits scene. It contains a great scene that connects this film to X-Men: Days of Future Past.