The Fangirly Diary of a Geek Girl: Of Thrones and Princes~

Greetings, my fellow geeks. This week, among all the usual franchise news, we have lots of Game of Thrones promos! Also this week, Benedict Cumberbatch said something he shouldn’t have and Tom Hiddleston manages to contain himself. And now, let’s start:

Let’s start with Evil Dead. The movie has its premiere at SXSW and the public loved it! It had all-around positive reactions. After the screening, producers Robert G. Tapert and Bruce Campbell had a Q&A about the movie, but there were questions about Evil Dead 4, which will actually be Army of Darkness 2:

That would be Army of Darkness 2. Everybody calls it Evil Dead 4, but Army Of Darkness wasn’t called Evil Dead anywhere except by the fans.

Here are some trailer screengrabs from Star Trek Into Darkness. Damn, Benedict Cumberbatch looks good in that movie. Unlike that Julian Assange movie~

On Star Wars news, Joss Whedon talks about what he would do with the movie if it was up to him:

You know, I wouldn’t go back, I’d go forward.  I would want to create characters that would resonate the way that they did.  I mean not that I don’t want to see [the new movies], I would be excited to, but I also feel like I would want to explore a very different part of that universe.

It’s awesome.  It really is.  It’s human and it’s deep and it’s also epic and still a huge superhero movie.  But it all makes sense and it all comes from very human elements and I think people are really going to love it.

If you have a faulty memory, here’s a 14 minute Game of Thrones Season 2 recap, while you wait for the third season premiere in a couple of weeks~

Was he waiting for them to be older? He might have waited a tad too much, there’s only a 10 year gap in the timeline between the books~

These are the covers of the last issue of Adventure Time with Fionna and Cake! They are all quite pretty~ 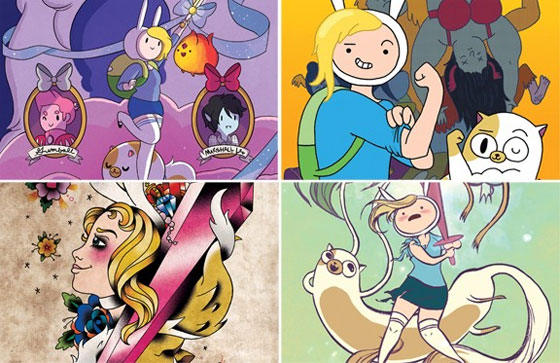 Love rectangle in Iron Man 3! Or at least that’s what Shane Black implies~ Guy Pearce’s Aldrich Killian “wants to possess everything Tony has, including his girl”, and Rebecca Hall’s Maya Hansen may not be “strictly a rival for Pepper Potts, but she has a real bond with Tony that goes way back”.

Joss Whedon says Agent Coulson is back from the dead (as in not a flashback, clone, robot or skrull) “for realsies”. Clark Gregg, that huge dork, retweeted it~

Yay! More Marvel comics! Infinite Comics! Yup, digital comic books designed to take advantage of the format and capabilities of mobile devices! See the video here. So that was the “52” teaser was about. Marvel will release a digital comic every week, so 1 year = 52 weeks. Ta-da! The first one will be the 13-part Wolverine: Japan’s Most Wanted.