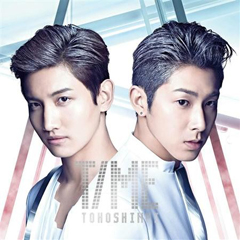 After releasing Catch Me, the men of TVXQ are back with their sixth Japanese album (second as a duo).

Let me start off by saying something that will always manage to impress me is how mature their voices have become. Especially Yunho’s, if I’m being quite honest. He’s gone from simply being the group’s anchor to a strong vocal presence, with impressive tonal quality and a broader range of vocal technicality. I suppose that’s to be expected when a group transitions from a quintet to a duo.

Unsurprisingly, they took two tracks from Catch Me (the title track and Humanoids) and translated them for their Japanese release. After listening to Catch Me for about the 10th time, I must say, it’s an impressive track that’s actually rather reminiscent of European electro, the likes of which made groups like Ace of Base such a huge hit in the 90s. It also must be said that the sharper cut of the Japanese language works much better for the icier tone of this type of electropop. One of the few times when a direct translation is actually better than the original.

But after a while all the songs — composition and even lyrical content — seemed to blend together, creating more a single song separated into sections. If we were dealing with a concept album, the likes of which we see from such artists as, say, Flying Lotus, this would be a brilliant way to construct a musical narrative. As it is, we’re dealing with a pop group — an innovative and influential pop group, but a pop group nonetheless. What we have is an album that pretty much hits one note over and over again, following a set structure: verse-chorus-verse-bridge-chorus. It isn’t a bad formula to follow, especially if it seems to work; however, it’s dull, unappealing, and mostly just makes for a mediocre pop album.

At the very least the dance tracks make an attempt at something resembling a step forward (Y3K, BLINK, ANDROID). But even those follow the same pattern even acting as separate entities from the softer tracks. They all seem to be following a narrative — basically, dance tracks from the future, if their titles, egregious amount of dubstep, and over-the-top computer embellishment didn’t clue you in. But that gimmick only works for so long. Hopefully, they move on to something more intriguing for future albums.

TIME is nothing new, nothing exactly groundbreaking as far as Japanese pop goes. It’s a nice blend of smoother tracks, more up-tempo balladry that seems to be their strong suit, considering the softness of their voices. It would’ve been nice to see the men do something a bit more interesting, considering how powerful their influence is in Japan. I’m not blown away with the album, but it’s a fairly decent offering, albeit a bit boring and not at all unique. I hate to say it, but I believe the group has become complacent, falling back on a formula that, while it works, is uninteresting and doesn’t at all allow for them to show us what else they can do.

Standout Tracks: Catch Me, STILL, One and Only One

You can listen to TIME on Xiami. You can buy it from YesAsia, DVD Heaven, Apple Music, and Yes24.