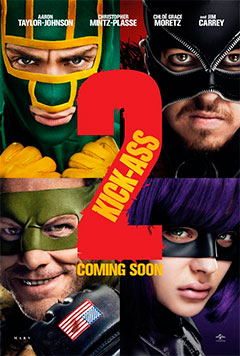 Based both on Kick-Ass 2 and Hit-Girl comic books, Kick-Ass 2 starts with a throw-back to a scene we saw in Kick-Ass between Big Daddy and Hit-Girl (Moretz). After that, it gives us the state of our protagonist: Hit-Girl is now living with Detective Marcus Williams (Chestnut), his godfather and Big Daddy’s cop partner back in the day, and high-school life doesn’t suit her; meanwhile, Kick-Ass (Taylor-Johnson) misses being a superhero and asks her to train him. Things take a turn for the worst when Marcus realizes Hit-Girl hasn’t stopped heroing and gives her an ultimatum, from there the movie will split in two with Hit-Girl being thrown in a Mean Girls/Carrie sorta mash-up, and with Kick-Ass discovering new costumed heroes to do good with. On evil side of business, Red Mist (Mintz-Plasse) is now The Motherfucker and is banding offensive-named paid thugs to be his villain group in order to get revenge on Kick-Ass for killing his father.

Just like with Kick-Ass, this movie has many scenes that were different from the comic because the general tone of these movies is more “light-hearted”, and, for the most part, these changes worked. Especially considering all the controversy surrounding certain scene with The Motherfucker and Kick-Ass’ love interest.

Also, just as with the first movie, while I have nothing against Aaron Taylor-Johnson as Kick-Ass, he still remains the least interesting of the main characters. Moretz and Mintz-Plasse were the best of the returning cast, and were clearly doing a better job with their character development.

As for the new ones, the two characters I loved but weren’t there as much as I wished were Carrey as Colonel Stars and Stripes, and Leguizamo as The Motherfucker’s aide/bodyguard. They were both funny and you attached to them fairly quickly. Which worked considering that their last respective scenes were the most dramatic moments of the movie.

Of the rest of the good guys, Faison as Dr. Gravity was the memorable character, being the first hero of Justice Forever, Kick-Ass meets. The others didn’t have much to do, except for Night Bitch (Booth) being ascended to casual love interest and Battle-Guy (Duke) because of his former relationship with Kick-Ass.

On the other hand, the evil side had Mother Russia (Kurkulina). She’s the best of that lot, and the fact that she commits serious acts of violence with the Tetris Theme as soundtrack is a bonus. I also think that woman should be in that Expendable Ladies (or whatever it’s gonna be called) movie they want to do. I mean, how many huge actresses with actual muscles you know?

Talking about that, the action/fight scenes were cool. I would have said they were even cooler than the first one, if it weren’t a tad too much shaky cam. The last one had a lot going on and for moments looked like a cosplayer fight but, while it’s supposed to be the face-off between Kick-Ass and The Motherfucker, the camera also gave us what we wanted: Hit-Girl vs. Mother Russia. And it was great!

In the end, Kick-Ass 2 delivers the expected violence, vulgarity and dark humor, but it wasn’t quite enough. It felt less fresh and the balance of the expected elements wasn’t as good. It also needed a bit more character development for Kick-Ass himself. I may also be getting too used to movies being over two hours long. I still wish it had a better run at the box office though, because despite its flaws it was a very entertaining movie and deserved better.