Steven Spielberg is back on a long forgotten Stanley Kubrick project. This time is not about robots, it’s about Napoleon. The twist? It will be a miniseries!

Neverwhere will finally begin on March 16th on Radio 4. Here’s a link to the website where you can find many interesting things about the production and Neil Gaiman. Also a teaser trailer and some pictures of the cast. 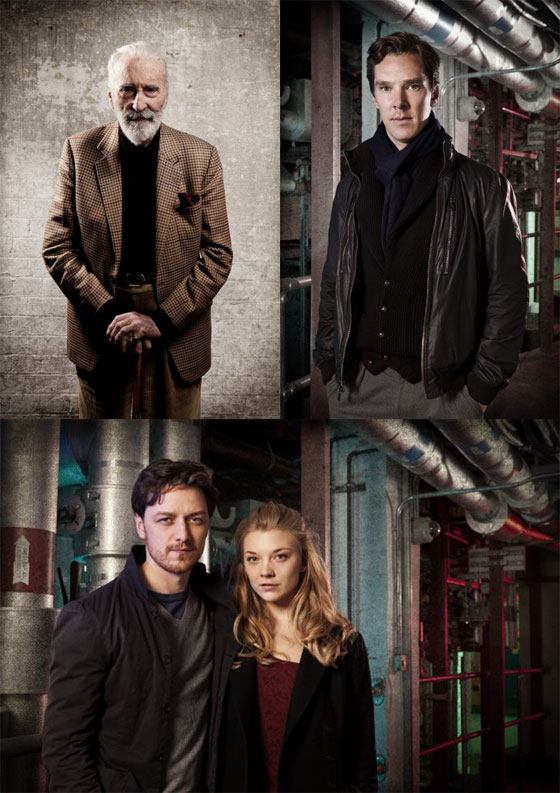 And here’s how producer/director Heather Larmour felt after she got her dream cast:

James McAvoy was always Richard in my head, Benedict Cumberbatch was always Islington. When they ‘yes’ I was like a small child in a candy shop – and then Christopher Lee said ‘yes’ and we all nearly fainted. It was just wonderful.

So there’s gonna be a new documentary about Shakespeare called Muse of Fire. From that on, my attention was caught. But you know what else? It will feature Dame Judi Dench, Sir Ian McKellen, Ewan McGregor, Jude Law, Tom Hiddleston, Dominic West, Fiona Shaw, Alan Rickman, Baz Luhrmann, Jeremy Irons, James Earl Jones, Christopher Eccleston and a freaking long etc. I might just cry of happiness.

Kevin Feige talks about Phase 2 of MCU and says that Guardians of the Galaxy will be 95% in space. That’s mainly what I wished, so yay! Also Phase 2 is about cosmic + political thrillers. Yep, I want those movies now~

RDJ talks about working on the HUD scenes in Iron Man movies (and The Avengers):

When you do the HUD work, usually it’s kind of the last thing in the schedule. And you’re going back and essentially living the movie again in close-up, tired.

And it’s a bit of a claustrophobic job too. But hey, at least they have a lighter, more flexible version of the Iron Man armor for him to wear, so that’s awesome right?

There is no comfortable version of it, so it’s kind of like, ‘Hey, don’t you think these bamboo shoots are actually a little less rough on the cuticle until they get down to the nerve?’

Comic book writer Chris Claremont talks about The Wolverine and especially X-Men: Days of Future Past. Why? Because both are inspired by his works.

You could look at it as time travel, or you could look at it as pan-dimension. It’s all a matter of how you want to define it, and I’m sure they’ve got some brainiacs out on the left coast earning a small research stipend figuring out a plausible way of making it fly. That’s the fun and games of Hollywood. How the hell they’re going to fit it into 120 minutes, I have no sodding idea. I’d be looking on this as your basic 1974 film with an intermission.

Comicbookmovie.com found a detailed review for Man of Steel. By detailed I mean spoilery.

This character arc has a two step resolution. The first is him coming to terms with his role as a potential protector of humanity, a conflict fueled by various events in his life, which brings us the first amazing and climactic point of the movie with the birth of Superman. The second is the reality of the existence of Superman on humanity and him coming to peace with what that means for him and how he is perceived.

Robert Kirkman goes from zombies to exorcism. Yay? This potential new show is based on his upcoming comic series set in the world of exorcism. Just like with The Walking Dead, Kirkman will work on this with Fox International Channels.