Oz, The Great and Powerful 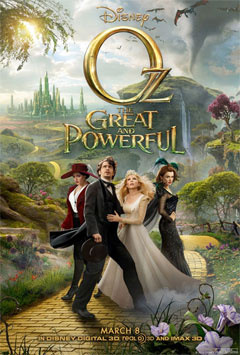 After watching Oz: The Great and Powerful, I wondered how Oz would have been with Johnny Depp or Robert Downey Jr. instead of James Franco. But we got the third choice, and while Franco did an adequate job, he wasn’t that great (or powerful).

Oz: The Great and Powerful is about Oscar Zoroaster Phadrig Isaac Norman Henkel Emmannuel Ambroise Diggs, “Oz” for short. He’s a magician from a traveling circus and is kind of a jerk. This makes his admiration of Thomas Alva Edison quite appropriate. One day, he jumps into his hot air balloon and into a tornado when trying to run away from “his problems.” He lands in Oz, and everything is pretty. He seizes the opportunity to become the ruler of Emerald City when he matches a prophecy. But things are not as expected, and he will find his inner worth to stand up for his new friends and defeat some evil witches.

So yeah, it’s a prequel to The Wonderful Wizard of Oz book, and it’s a story of a man of dubious character that wants to be great but learns to be good. He also defeats magic with science! Steampunk science! That alone makes the movie seem awesome. The problem is the many tone changes it goes through, which would be fine if they were done in a more cohesive way. So it was good it was so visually stunning, because it made up for the lack of rhythm at parts. All the production value was excellent though, beginning from the black and white that showed the previous life of Oz before he fell into, well, Oz.

Now let me say it’s the CGI characters that steal the show, both Finley the flying monkey (Braff) and the China Girl (King) were engaging, cute, funny, brave and had good lines. The China Girl even had a backstory! They made the time Franco was on screen better. Sadly, you couldn’t say the same thing about Williams’ Glinda. She’s usually a more than decent actress, but she was acting like a grown-up Childlike Empress at times. Her fight scenes were good though, which felt good after she was turned into a damsel in distress. The other actresses fared better. Kunis as Theodora was as good as Franco, and her character was a nice contrast to his. Theodora was nice and innocent, and Oz was still a jerk. Then a transformation happened, and Kunis was as hammy as the character required and she did it excellently. Finally, there was Weisz as Evanora, who was the most consistently good at playing her character.

Oz: The Great and Powerful is an OK movie. It’s not remarkable and won’t be cherished as The Wizard of Oz, but it’s very pretty and it’ll keep you entertained. And apparently the audience liked it just fine and a sequel has been already greenlit.