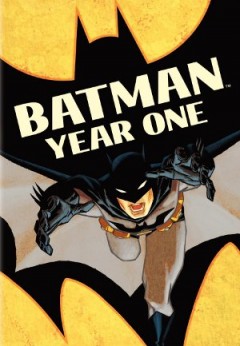 The Dark Knight really showed Batman Begins‘ true colours. To me, Christopher Nolan’s 2008 sequel managed to convey the hell of Gotham City far more effectively within the opening ten minutes than Begins could over two whole hours. I recently caught Begins on TV and it just felt like numerous short scenes tied together with no sense of tension, a tepid depiction of Gotham with 12A-rated villains and the ultimate big producer concession of having Mrs Tom Cruise in a starring role. It was the same thing I felt seeing the film first time round, that everything was too ‘safe’ and underwhelming for a Batman film.

It was doubly disappointing considering Nolan’s inspiration for the film, Frank Miller’s seminal Year One. Considered by many to be a classic of the comic genre, Miller’s 1987 novel is the definitive origin story of the man in the mask.

The story is a simple one: Bruce Wayne returns to Gotham after rigorously training to be a crime fighter, and James Gordon moves to Gotham to join its police force as lieutenant. We then follow a year in their lives as they try to save Gotham from madmen, bent cops and the Mafia. It’s a grimly told tale which knows the best way to show Gotham as beyond redemption: by having Bad Things happen to Good People. Gordon’s beaten by cops with baseball bats. Bruce gets humiliated by a pimp with a knife. Children are abducted; pregnant women are threatened. This is exactly the kind of world that needs a Batman, and I’m glad to say this animated adaptation perfectly recreates the comic’s sense of real urgency and dread. I’d even go so far as to say it’s perhaps too faithful to the source material, as every panel and plot point is brought to life, but without the ‘noir’ art style, Lauren Montgomery and Sam Liu choosing to go with a modern Japanese ‘Madhouse’ feel instead.

Ignoring the aesthetics, one has to wonder what’s the point of the whole project, seeing as you can easily read the original masterpiece. You could dismiss this as just an animated remake of Batman Begins, minus the Scarecrow, ninjas, and Rachel Dawes. I’d say, though, that Batman: Year One is a perfect primer for those unfamiliar with the comics, and an essential addition to the Batman universe on film. (By the way, it’s rated 18: Batman actually gets to use the F Word for the first time!)