The Fangirly Diary of a Geek Girl: Habemus Doctor

Greetings, my fellow geeks. This week has been full of news, including the D23 expo at the end of the week, cast info from The Expendables 3, Thor: The Dark World‘s new trailerand of course, we finally meet our new Doctor. Let’s start!

Here’s a list of possible candidates to play Batman in the Batman/Superman movie, according to The Hollywood Reporter. I am not really fond of any of those choices. Except for Richard Armitage, because I like him. I do believe he doesn’t have the jaw for it though.

And here are some pics from Kill your Darlings, because I want to watch that one. And it’s the best DanRad has looked since certain Harry Potter movie. Here’s also a little teaser (which feels incomplete):

Karl Urban talks about why, as a Star Trek actor, doesn’t want to be in Star Wars movies:

When I go into a Star Wars movie I want to be completely enveloped. I don’t want to be taken out of the picture by going, ‘Oh my God, there’s Scotty, what’s he doing in Star Wars?

He also wishes for some originality in Star Trek‘s new film:

I really think that what we should do from here, in my personal opinion, is strive to be original. Strive to be something different and new. You know, let’s not forget that Star Trek as envisioned was about space exploration. And it would be really wonderful to harness the spirit of that and apply it to the next film, so that we do something different than a revenge-based picture.

Peter Capaldi is the new Doctor!

And he sure is happy to be!

And as everybody mentioned, he’s credited in World War Z was W.H.O. Doctor… and it was in Cardiff~ Also, here’s The Guardian’s liveblog of the whole announcement, and here’s the meme of Malcolm Tucker (his character in The Thick of It) as The Doctor. But jokes aside, The Doctor ain’t gonna be cursing left and right, so what kind of Doctor is Capaldi going to be? Troll King Moffat says he doesn’t know. I don’t believe him.

John Leguizamo wants to play the first even Latino Joker. Eh, he would be full on make-up and he did show he can play fuck-up clowns when he was the only good thing about the Spawn movie… so why not!

Pacific Rim did well in China and there’s talk of sequels, although I think it’s unlikely because China’s box office doesn’t come back in full to the studio. But Charlie Day did talk with Guillermo Del Toro about a sequel, although probably that will change if it ever gets made~

I remember when I first met with him that he liked the idea of Newt becoming a bit of a villain in the second film. But, I think over the course of making the film, and the way the character resonated with the audience, I don’t think he would want to turn him into a villain now, but I really have no idea.

Agents of S.H.I.E.L.D. poster! And Joss Whedon talked about it after the panel on the Television Critics Association~ 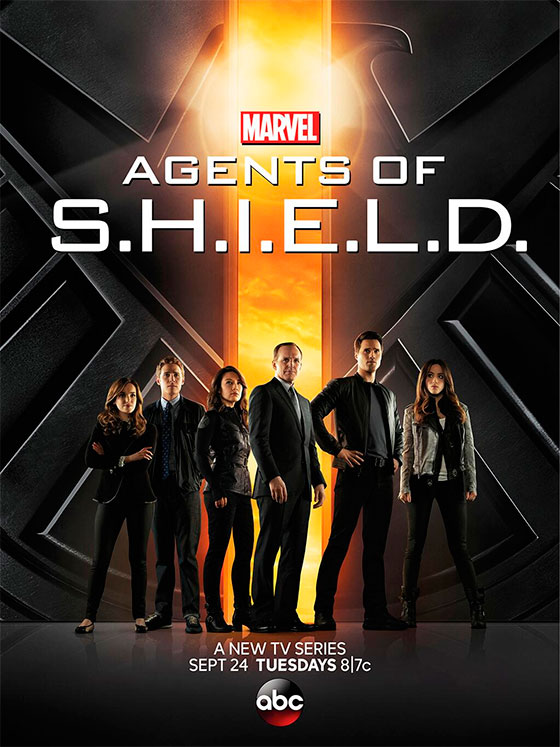 The question is never how big can it be. The question is how small can it be and people are still going to be showing up and really caring. Some of my favorite issues of comics when I was a kid were issues where people just sat around talking and the fight wasn’t coming ‘til the next issue.

OMG! Me too! I love it when comics (and cartoons based on comicbook characters) when they just talked and did normal stuff!

New Sailor Moon anime at the end of the year! It will be a new adaptation of the manga, and I hope it’s closer than the original anime because Mamoru/Tuxedo Mask was way cooler in the manga~