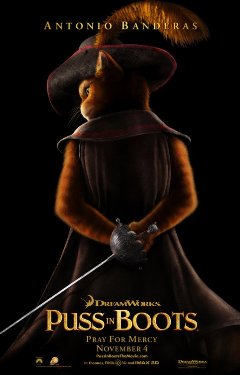 Ever since the Puss in Boots character made his debut in Shrek 2, he has always been one of the best parts of the Shrek franchise thanks to the Zorro-esque characteristics, comedy value and Antonio Banderas voicing Puss. But is the feline swashbuckler capable of carrying a film on his own?

Set in the fictional Southwestern border town of San Ricardo, Puss in Boots tells the story of Puss back in his days as an outlaw. He is attempting to steal magic beans from Jack and Jill (Thornton & Sedaris) that would allow him to reach a giant’s castle in the clouds and steal a goose that lays golden eggs. Puss isn’t alone in this mission — he is aided by Kitty Softpaws (Hayek) and eggman Alexander Humpty Dumpty (Galifianakis).

The only things Puss in Boots has in common with the Shrek films might be a few jokes, the use of fairy tale elements and the main character. Other than that, Puss in Boots goes in a different direction. It’s an action-packed film that centers itself around a “good vs greed” storyline involving Puss and Humpty Dumpty. The story is told through a flashback of both meeting at an orphanage.

Puss in Boots works well thanks to its gorgeous animation, plot twists, a better display of humor than the last two Shrek films and solid voice acting. Banderas is still great — he pretty much lives in the skin of Puss and he’s the shining star of the film. Zach Galifianakis worked well in his role as the complex mastermind Humpty Dumpty. Salma Hayek’s voice works well with Banderas. On the other hand, Billy Bob Thornton and Amy Sedaris weren’t used that much despite both working their roles well.

Puss in Boots is far from perfect. The plot is  thin, some of the silliness going around and the pacing, the flashback story in particular, pegs the film down a notch after a very strong showing between Puss and Kitty Softpaws. But I’m willing to overlook some of those flaws since Puss in Boots manages to be engaging thanks to the Puss-Kitty-Dumpty trio.

In a weak year for animated films, Puss in Boots works well enough thanks to its release date and main characters to snatch an Animated Feature nomination at the Oscars. As for the film deserving to win or not, that’s another story.