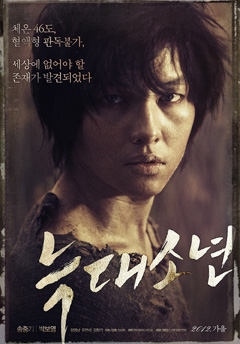 The word “twilight” gets so easily thrown around these days to describe any romance film target at young adults [guilty!], but in essence, that description wouldn’t necessarily describe Jo’s A Werewolf Boy. This one was an original film that was later published as a novel ;P

Though the world seems to want to see creatures of the night in other lights… zombies that can fall in love in Warm Bodies, A Werewolf Boy sees a young man who turns into a werewolf not by the influence of the moon, but with anger triggers — think Hulk, as this fantasy romance circles some sci-fi ideas while dealing with someone touching drama and some decent acting.

Soon-Yi (Park) and her family — mother (Jang) and little sister (Kim) — are moving to the countryside due to Soon-Yi’s health condition. The house has been given by Ji-Tae (Yoo), the son of Soon-Yi’s deceased father’s business partner, who introduces himself as the jerk that he is when he sits idle with his hands in his pockets, as the few people that live nearby help the family move their things in.

One night, Soon-Yi is startled by a mysterious (and rather hairy) shadow, who shows up the next day as the extra disheveled, stinky and hungry nameless boy whom they name Chul-Soo (Song). As the local authorities are looking for his family or settling for a place to take him in, Soon-Yi’s family takes him in.

Of course, you would think… girl and boy wolf meet each other and fall in love, however, I never really saw Jo’s A Werewolf Boy as a romance, but a film about companionship. Chul-Soo and Soon-Yi never truly feel attracted to each other, but they do form a bond as she takes it upon herself to teach him to behave himself, to write… to speak, the connection Chul-Soo feels for Soon-Yi isn’t only for her but it extends to all her family, who take him in without judgement. A lone wolf taken in by a pack.

A Werewolf Boy breaks most werewolf conventions, making sure to never use the werewolf metaphor as a repression of sexual desire — it actually hardly uses the creature except for key scenes, so most of the times it feels like a really down to earth fantasy film, which is in turn a little bit disappointing. The worst aspect of the film as it gets tiring was the treatment that “the bad guy” received… there’s just so much spoiled rich brat boy that one can take despite Yoo’s best trying.

There are apparently two cuts of the film, I might have seen the Director’s Cut, which supposedly includes a final scene where Soon-Yi and Chul-Soo get to meet, that I have taken as a dream… making it a bit of a bittersweet ending.

A Werewolf Boy will be screening at KOFFIA in Brisbane, Sydney and Melbourne.

You can also get the film on DVD on Amazon | First Press Korean Bluray or DVD on YesAsia.