The moments surrounding Seoulsonic, SXSW’s second night of eclectic Korean artists, were quite anxious. There was threat of a serious storm, and the air lay heavy and thick, sticking to the skin and making everything even more claustrophobic in the sea of humanity that was 6th Street. So when we finally got a chance to walk into the Majestic out of the oppressive humidity, it was like breathing fresh air.

There was a nice buzz, a sort of anticipatory calm over the people already there, sitting on the side bench that wrapped around to an upper sitting area, and at the bar. What we would all experience that night, however, would certainly change the landscape of SXSW for many in attendance, especially me.

Introducing the band that got my first (and only) fangirl-y squeal of the entire festival. It didn’t happen the first time I saw Dean, not when I first heard Zion. T, not even when Victim Mentality, with all their sex and fire, hit the stage (though I came damn close). No. The first time I actually lost my mind and forgot who, what, and where I was came on the night of Seoulsonic.

Billed as a Korean reggae band, I wasn’t quite sure what I expected. But I assure you, it wasn’t that! After milling around for a few minutes—waffling back and forth about whether or not to talk to Bobby Choi (known by his stage name Big Phony) because I’m a sad and pathetic loser when it comes to talking to artists I admire—the band starts up. There’s a guy in the center on drums in what looks like traditional Korean garb (not quite hanbok, I don’t think, but he was sitting down, so I’m not 100 percent sure).

I’m already intrigued because none of the artists I’ve seen up to that point had ever worn anything traditional. Then he starts up, a barking high note that gets everyone’s attention. And they sure as hell knew how to keep it! 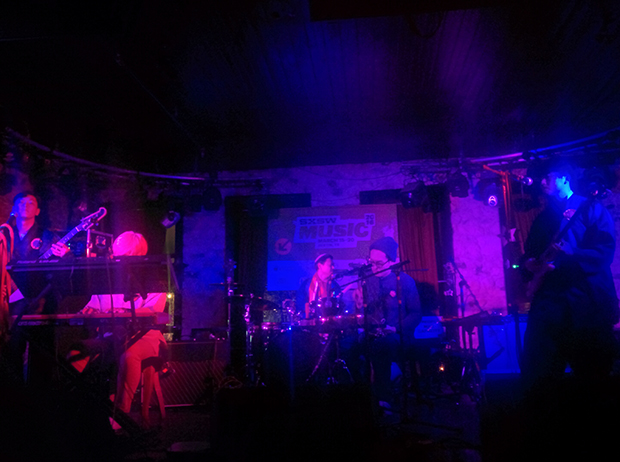 From that point on, I didn’t know what everyone else had heard from them, but all I heard was good old-fashioned Chicago R&B! Granted, they are called “Windy City,” but was I expecting some Chicago two-step from the depths of Seoul? Instead of Bob Marley, I got Curtis Mayfield, Rufus, The Chi-lites—the music of my childhood rolled into this band of Korean funksters. And yeah, when there was a lull in the music for a second, I sort of lost myself and screamed like a groupie who throws her panties on the stage. (So that’s where they went!) The bassist got a good little chuckle out of the high-pitched “SARANGHAE” that ripped through the crowd.

But the music didn’t let up, not for the entirety of their set. I found myself so thoroughly moved, I had to dance. And while I’m not saying I started the Electric Slide… I sort of started the Electric Slide. Keep in mind, there are mostly Koreans and white folks standing around. There were about four or five black ladies, including me, standing in the center. As soon as we started up, it was like the parting of the Red Sea, and all these Koreans and whites sort of just… didn’t know what to do. Apparently pictures were taken and people were shocked and overwhelmed—one guy coming up to me and saying, “You just made me so happy to be here.” Yeah… things got out of hand, but in the best possible way. If I wasn’t pumped before, Windy City definitely amped my anticipation for the rest of the night up by a few thousand watts.

This was a band I’d actually been anticipating. I’d listened to their newest music prior to SXSW, and the lead singer’s voice just gave me chills. This post-punk band with inspiration from groups like the Pixies and the Go-Go’s (at their earliest and most punk) have some of the rawest rock coming out of Korea, in my very humble opinion. After the ’80s, it’s rare to hear an all-female punk band from anywhere, really. So when they hit the stage, my heart was all a-flutter (and from more than just chasing that boogie down while Windy City was on the stage).

These women sound just as incredible on stage as they do in studio. Their sound was huge, filling up that small upstairs club space of the Majestic. I felt every thrum of the guitar in my bones, every thump of the drums in my chest. To be quite honest, in that intimate space in front of the stage, their performance literally took my breath away. The live cut of Across the Black Tunnel was so damn powerful, I swear I got a little choked up. Mohho’s voice is just ridiculous. I couldn’t believe all the rawness that came out of that little body, like sugar in the raw melted and poured still bubbling on a marble counter: sweet and dangerous. Seo-hyun went all in on that bass, making the sound settle in the guts! And Mui? Girl is an animal on the drums, and she was just relentless in keeping that beat. Even in the lighter moments of them performing Swimming with Dolphins, in which they wore little inflatable dolphin hats, the music was driving, busy, and just so powerful. Yeah, I was in love, and I’m not even ashamed to admit it.