For my final day in Austin, the ladies and I trekked to Cheer Up Charlie’s for an impromptu showcase that didn’t show up on the SXSW official schedule. In fact, I changed my bus ticket just so I could stay an extra day for it. The venue (no doubt named after the song of the same name from 1971’s Willy Wonka and the Chocolate Factory) played host to a mini-concert like so many we’d seen and the few I attended during the week, this one purporting to be a Taiwanese/South Korean exchange of musicians. At the close of the official music festival, this was really just the perfect little cap to put on the week, a sort of Sunday Brunch for those who were probably still feeling the high and the madness of the final night. As much as everything about SXSW was a highlight to my life, this was definitely a highlight of the week.

To start things off, we had a B-52-inspired Taiwanese band. They had a style and swagger to them that I hadn’t actually seen anywhere at SXSW. It was a pastels, pink lemonade, and summer all year round type of sound, music that’s nostalgic yet steeped in the now, bubbly but not cloying sweet. It was doo-wop, it was rock, it was everything that I love about the groups like the aforementioned B-52s without the chintz of their most well-known tracks (think Rock Lobster with a little less lobster).

Really, what I took away most from this band was this sense of euphoria. They really did take me back to a time I have no real business knowing anything about but can’t help but feel a wistful bit of nostalgia for. They sort of reminded me of a groovier version of the Sugarcubes, Björk notwithstanding. You could feel the beach, the hot rays of summer on your back, the faint mist of an ocean breeze. The Queensuitcase was the perfect way to start getting over the midweek hump.

Really what can I say about this band? These females are the epitome of punk, and they do it with a smirk and a giggle. Their performance that Sunday morning was really just as elegant as their performance in the club space of the Majestic. There really is something magical about these women when they hit the stage. Their sound is raw, open, and completely without pretense. Obviously they have to know they sound good, or at least believe in their abilities to hold a crowd getting over the madness that was SXSW. However, there’s no arrogance in the way they perform, no sense that they are above the fray, so to speak. They love to interact with the audience, for instance giving away the dolphin hats after their now famous performance of Swimming with Dolphins (“We won’t be able to take them on the plane with us”). I was lucky enough to get one of those, and I kind of actually squealed like a child at Christmas. 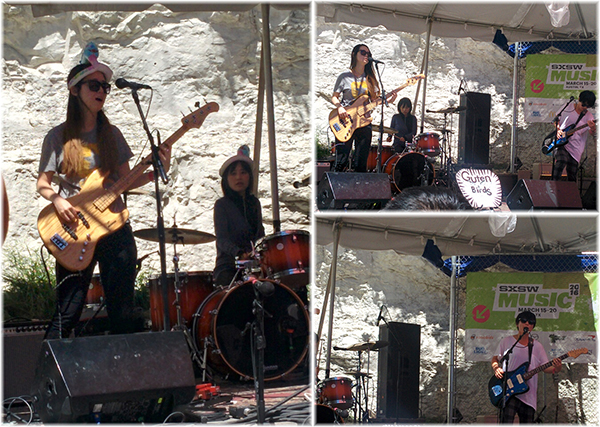 The brightness of the sun couldn’t outshine their passion. I was once again swept away in the brilliance of track Across the Black Tunnel. The croon in Mohho’s voice will always give me chills and send me to an emotional place. In the morning air, after the dust had cleared a bit from the raucous of the week, there was something a bit freer in their performance. Perhaps it was just the fact the showcase took place on Cheer Up Charlie’s back porch, out in the sunlight. Maybe it was the feeling of ease after getting to the end of a series of performances knowing they’ve made an impact without any major flub-ups. Whatever the reason, I felt myself smiling throughout their set; I could feel their ease and openness on that stage.