I first saw them at K-pop Night Out, but as you’ll remember, I was on the balcony. Well, the Majestic had ample space near the front, where I sat charging my phone (as you can probably tell from the lack of pictures, it died during the Guten Birds’ performance). So I got to experience that electricity up close and personal. Which means when the rock-star badness of keyboardist Heong-suk oozed all over the stage, I actually got to feel it.

Of course, the charisma of lead singer Jung Bong-il had a greater impact because, again, the intimacy of the venue allowed it. The music was just as thumping as it was at the Belmont, if not more. You could see how much fun the entire band was having, even Ru-ri, the bassist, had a huge smile on her face about halfway through the second song. The energy in the Majestic was just overwhelming, so palpable the performers were affected.

We come to the part of the night I was actually most looking forward to. After having interviewed him my first day at SXSW, I was really intrigued to see what WYM was going to offer on stage. In fact, after losing my mind with Windy City, I’d gone to the back to grab some water, and I saw him standing there. We said hi and shared a little side hug, chatted for a few seconds; then I asked him when his set was. It’s not often you actually get to meet and talk with one of the artists performing, and I was really excited. He started his set the same way he starts his debut album: with the Outro. That’s one hell of a way to get people to pay attention to you. It helps that he actually likes to talk, engaging the audience.

He began his set with, “My name is WYM, and I’m going to say my name at least seventeen more times so you remember it.” And he kept count, too, making good on his promise. Seventeen times in total! Yeah, this was 100 percent my kind of dude: cheeky, silly, and totally into his music.

However, I was not expecting him to be so damn smooth. He strolls up on stage in his blazer and sunglasses, then commences to blast the speakers with the overindulgent grandness of his Outro. As the music gets going, one thing is made abundantly clear: the brotha is fawnky, you hear me! Even within the confines of electronica, there’s definite swag and stank on his notes. His most well-known single Trying, is a beautiful piece of music live, as is Moon River, a truly elegant sonic experience when amplified. But then he lays into Empty Desire, and when I tell you the crowd (meaning me and my collection of black friends) got into it…. 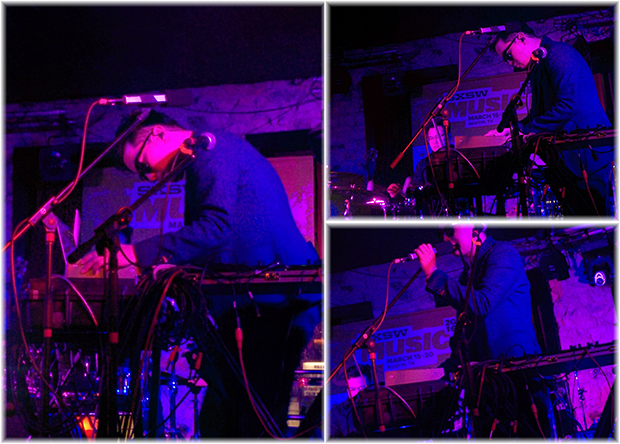 For the first couple songs I couldn’t quite put my finger on what it was that made this man so in tune with the funk. Then I noticed the little tube he kept putting in his mouth. Wouldn’t you know it, this self-proclaimed soul and R&B kid took some notes from one of my favorite artists of all time, the late Roger Troutman of Zapp & Roger, and decided to get himself a talkbox.

It’s clear this man knows his way around music, even stopped off at the corner of funk and R&B to take a few lessons. One of my friends and I started in with a verse from Computer Love, and I don’t know about her, but I completely gave myself over to his cause. Because, seriously?! Who even uses a talkbox anymore? I mean, outside of veteran artists, producers, and old-school music fans, who even knows what it is?

The night was getting hot, the first half of the showcase just as rocking as any R&B/funk/rock revival you could attend. And all of this from South Korea! Anyone still stuck in the chintz and tropiness of K-pop seriously needs to take a listen to any or all of the artists in this blog and reevaluate a few things, broaden your horizons a bit!

Unfortunately, I couldn’t stay for the entire showcase. One of the writers I’d come with was incredibly tired (and honestly was being accosted by someone in the bar), so regrettably I had to skip out before Heo and Neon Bunny hit the stage—terribly unfortunate, especially because I love Heo’s eclectic mix of light acoustic-inspired music and dark, gritty house; and wanted to hear Romance in Seoul and Forest of Skyscrapers live. But them be the breaks.

However, that doesn’t take away from just how exceptional Seoulsonic was for me. I would’ve never guessed just how raucous the music would be, or how much it would move me. More than K-pop Night Out, I was completely blown away and the most affected emotionally than at any other showcase up to that point. That was an experience that I will never in a million years forget.

(Pictures compliments of my phone’s camera.)