Love it or hate it, Ginger Snaps is, for my money, the second best coming-of-age story on the planet. It captures female puberty in the most creative way possible. Honestly if this film had been around when we were learning about all the joys of becoming a woman, I think a lot of women would have a slightly different outlook on life. As it is, the film is just smart. Equal parts teen angst and grisly horror, Ginger Snaps gave form and violent function to the hormones and internalized rage of someone who’s body and chemical makeup were changing completely out of her control. Add having to fight a case of lycanthropy, this film had no other choice but to be utterly fantastic and outrageously horrifying. 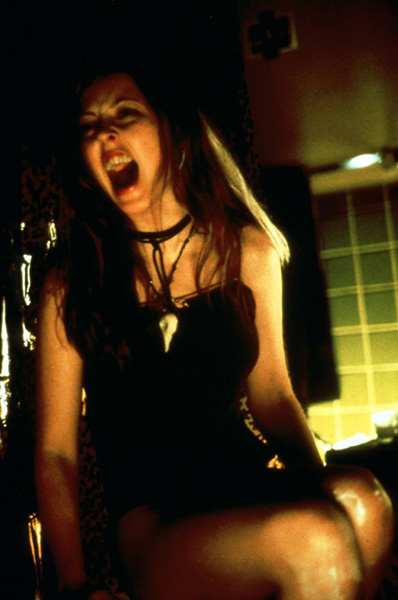 All you really need to say is Alfred Hitchcock. From that point on, anything else is irrelevant. The man was an absolute genius of storytelling and suspense. With Vertigo he used the conceit of having dizzy spells to literally portray a man whose world constantly spins out of control. The final scene is so harrowing because in the end it didn’t have to happen, but in true Hitchcock fashion, it was sort of an inevitability. Everything about this film from the styling to the acting and the relationships between the characters really affected me and sort of made it hard for me to trust human interactions for a while.

Damn, Australia? You okay? You need a hug or something? I don’t even know where to begin with this one. This is the first Australian horror film I’d ever actually heard of, and I was kind of sorry I did. As if the population of creatures the likes of which one could only imagine in their nightmares wasn’t enough, Australia is home to one of the most frightening and dangerous expanses of land in nature: The Outback. Seeing this film just compounded my fear of the continent, to be honest. Because if you ever get lost in the Outback, it’s almost a certainty no one will be able to hear you scream for help, let alone save you. With that in mind, when a stranger does come around, you’d best be on your guard. Wolf Creek made fears I never even knew I had come to violent fruition: getting lost where no one can reach me, strangers with promises of help, psychopaths who torture you with a smile and try to comfort you while they’re sticking a knife in your back. Moral of the story: never party in the Outback. Lesson learned.

Quite frankly any film that focuses on the blindly and devoutly religious is terrifying because there’s no amount of reasoning that could get through to them. There’s a fine line between belief in a certain line of thinking and cultism. The people of this little Scottish town take their devotion to a new level of the perverse when they roll out the Wicker Man, a wooden statue standing like an albatross against a flat sky, haunting the minds of nonbelievers who dare to impose their wickedness on the town. Sergeant Howie (played by Edward Woodward) learns that lesson the hard way. The ending scene was imprinted on my mind for days afterward: him singing his own Christian hymns as he got a front-row seat to the burning of the Wicker Man in tribute.

Again, no laughs. You can’t tell me Ursula the sea witch isn’t one scary-ass sea creature! When Ariel finally gets what she wants, it’s at the cost of making a bargain with a woman with nothing to lose and absolutely no qualms about what she does and what she is, and what she is is crazy beyond all belief. Her voice, the way she moves, her eyes, her hair, her tentacles! Everything about Ursula was the cause of so many nightmares I had to try to force myself to wake from. Even now I get the rare night terror starring none other than the queen of sass herself. This is what it means to both respect and fear a villain. You know you’re doing your job right as a filmmaker when your villain haunts the dreams of viewers for over twenty years!