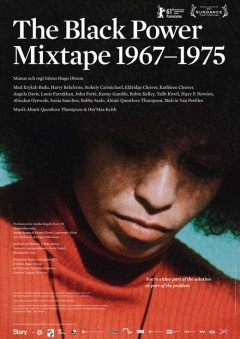 The documentary Black Power Mixtape was originally made by Swedish reporters in the 70’s. While including footage of some of the most influential figures of the Black Power Movement, the story focuses on Stokely Carmichael’s and Angela Davis’ labors in achieving an equal society without discrimination.

The film brought new depth and dimension to Carmichael’s character and work while also showing him in personal contexts. For instance, in one scene, Carmichael asks the reporter to continue the interview with his mother instead, which he does. This scene expresses the emotion and authenticity that complies throughout the entire movie. Pictures and interviews with Angela Davis are edgy and sublimely straightforward. It feels like new, crisp material, even though the recordings are more than 30 years old.

The second part of the documentary shows a couple of today’s artists telling their stories and experiences from growing up in Harlem and Brooklyn. Erykah Badu gives us a personal description of her childhood and how poverty has impacted the begrudged black people of Harlem. Rapper Talib Kweli also shares his stories and explains how The Black Book Shop in Harlem gave him all the knowledge and inspiration needed to pursue his great success in writing lyrics, with an emphasis on black communities and injustices in societies.

Black Power Mixtape is an educational masterpiece in the world of documentaries that gives us general perspectives of the Black Power Movement as well as specific delineations of strong characters within. Malcolm X and Dr. Martin Luther King, Jr. obviously have given roles in this piece. However, more space is given to those personalities that are not as frequently mentioned.

Old school photography is at its best here. We get to see old, ragged houses, heroin users leaning against dirty brick walls surrounded by kids playing and gangsters dealing drugs. Mixing this with new footage from today shows the transformations that have taken place. Neither Harlem nor Brooklyn is anywhere close to what it used to be. These transformations are illustrated with highly genuine and honest photography. After watching Black Power Mixtape, you will feel like you have been travelling back and forth through time. This upright portrait made me feel like I was there. For an hour and a half, I was actually a part of the Black Power Movement. I can only say go connect to it yourself!