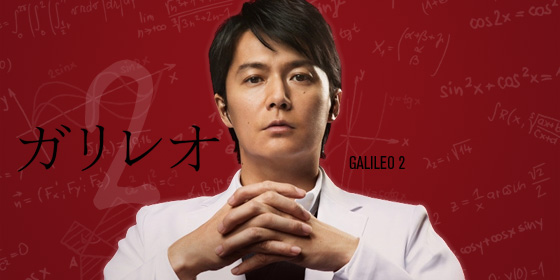 Galileo 2 is the second series following the 2007 drama that gave way to Dr. Yukawa with Masaharu Fukuyama back for his role as the handsome eccentric physicist who gives lectures to conference rooms filled with female students too in love with him to care about physics.

The second series, however, gives way to rookie Detective Kishitani Misa (Yoshitaka Yuriko) replacing Detective Utsumi-kun (Kou Shibasaki), who’s heading off to America — apparently to investigate more weird phenomena. Maybe she’ll run into Detective Otonashi from Toshi Densetsu no Onna. Kishitani seems to be everything that Utsumi wasn’t when their respective series began- Kishitani, for example, is joining into the force after graduating from Teito University. She really prides herself in her abilities and comes off as a slightly snotty young person who “knows better” than anyone else, so straight off the bat she’s less entertaining than Utsumi, even if her “butt injury” on episode 3 titled Kikoeru (Hearing) could give Utsumi-kun a run for her money.

The issues on Galileo 2 remain from its predecessor as well, following the order of a weird event happening, clues are given, and even though Dr. Yukawa doesn’t seem to know the answer to this puzzle, something always happens to make him snap. Think of it as any procedural show: CSI, House M.D. — there’s always an “Eureka!” moment. There’s never an underlying issue to connect one episode to the next, so while watching them can be fun, they never work as a whole. This, of course, would work if the show were in syndication.

Though the chemistry between Yoshitaka and Fukuyama isn’t as strong as it was with Shibasaki, the show even has an episode where Dr. Yukawa and Kishitani barely interact with each other in episode 7 titled Yoso Ou (Masquerade), it doesn’t handicap the show as much as people thought it could, but it’s telling. The best element in Galileo 2 seems to be some of its guest stars with Yu Kashii (Linda, Linda, Linda) making an appearance on the seventh episode, and Yu Aoi following on episode 8 titled Enjiru (Acting).

Overall, though Galileo 2 lacks some of the spark of its original run, it’s passable entertainment.