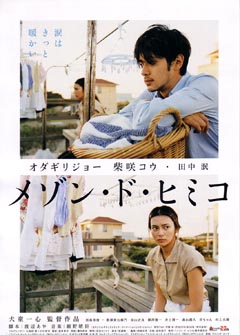 When people tackle LGBT films, it is often from the perspective of the individual coming out, taking us on a journey of discovery and liberation — but what of the family? What happens to the forgotten daughter that the openly gay man has set aside? This is the focus of La Maison de Himiko, when broke and on the brink of turning towards a sex hotline job, Saori (Shibasaki) gets an offer from Haruhiko (Odagiri) to make good money working as a nurse in a retirement home for gay men — La Maison de Himiko. La Maison happens to be owned by her father — Himiko (Tanaka) — who lived his life as a relatively successful gay man to the bitter memories of his daughter.

Though at first Saori really can’t accept these men because of the grudge she holds against her father, little by little, she becomes more attached to them and will do everything to maintain this retirement home, which seems to be going under.

One of the great collaborations in the film happens behind the scenes with director Isshin Inudo working with writer Aya Watanabe, both of whom had previously collaborated on Josee, the Tiger and the Fish to great character study success. It’s both their sensibilities that work perfectly to tell this story of the daughter trying to understand her father’s decision, as well as her mother’s. And despite Odagiri’s character not being easy to decipher, his acting alongside everyone in the cast makes La Maison de Himiko alive, sitting comfortably on the fence about conventions (there will always be flamboyant gay men) and breaking them. For example, there’s Ruby (Torauemon Utazawa) — a flamboyant post-op male to female character that hasn’t fully completed her transition that dreams of meeting her grandchild, who sends a not-so-cryptic postcard that Saori helps solve.

While the film tends to be rather gloomy with long pauses, silences and longing looks between characters that can’t properly interact with each other, there are light elements to brighten the mood. One of my favorite moments involved Saori revealing that she was not considered sexy enough to wear a Playboy bunny outfit to gay resident Yamazaki (Kira Aoyama), who goes out of his way to get her one which she can use while he wears the dress he’s made for himself. It’s probably as light as the film gets as it explores other more emotional themes, including a confrontation with one of Yamazaki’s ex-co-workers and a boy that’s intent on vandalizing the retirement home with his friends.

Shibasaki Kou proves to be wonderful for the role, with the right amount of rough edges — a coarse exterior to the wounded girl she was growing up, as she is finally able to grasp the relationship that her deceased mother had with her dying father. One thing that I didn’t get was Saori’s boss (Hidetoshi Nishijima), other than… contrast? He was a man’s man? Something weird about his inclusion that I can’t place within all the other characters. Otherwise, La Maison de Himiko is solid, especially if we’re looking at LGBT films from the other side’s perspective.