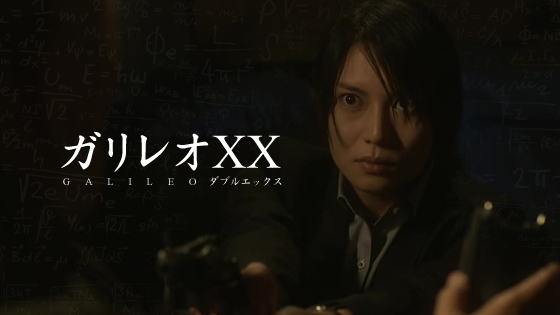 Raise your hand if you missed Kou Shibasaki on this year’s Galileo series [1]? It certainly doesn’t seem like I was the only person to do so, because according to rumors- Fuji TV got fan letters requesting Shibasaki be back… so they did. They brought her back for a TV special titled Galileo XX (apparently read “Double X“) and subtitled Utsumi Kaoru’s Last Case.

Fuji TV, I’ll take it. Though this Special really stands on its own, as it lacks Masaharu Fukuyama throughout the whole story (except for a brief cameo) without a lick of the science that made the show a “galileo” worthy of MythBusters, it is merely intended for fans of Shibasaki who inhabits the role of Detective Utsumi Kaoru one more time, as she later embarks on her career as a paranormal detective in Oklahoma — as seen on Series 2.

In here, Utsumi-kun ponders a lot about being a woman in a man’s world, as she is expected to disappear from the force since they have no place for ‘old hags’ like her any longer. Her boss is sending her to Oklahoma for training, but Utsumi knows that they just want her gone. One day, during an investigation round, Utsumi notices a man pushing a wheelchair with a disheveled old woman on- she’s dead and being paraded. The man in question, Jonen Kenichi (Yusuke Santamaria), confesses to a crime in another prefecture only to backtrack his statement when he reaches his destination, making a scene.

Blaming the police and using the media to his advantage in a case led by Chief Takasaki Yoriko (Kimiko Yo) and subordinate Sekioka-san (Masato Ibu), Galileo XX turns into a battle of lies, conspiracy, murder and… admittedly, a bit of laugh. And HEY! Yuya Yagira, where have you been since winning Best Actor at Cannes for Nobody Knows and all your personal drama? It’s kinda surprising to see you and not recognize you at ALL.

Though in essence Galileo XX can be any freaking detective story, it’s good to have Shibasaki back for nearly two hours of pure her. She gets to be vulnerable, assertive, obstinate, super rocking… and to top it all, really REALLY funny. Especially during her scenes in the Love Hotel [1], because I really didn’t expect that kind of interaction. I told my mom about it, and even she thought it was funny, so I probably might get her to watch it too.

The show indeed lacks that sense of scientific wonderment, but it still works — I didn’t miss Masaharu Fukuyama at all, and I enjoyed some of those moments with Masato Ibu. Nevertheless, Kimiko Yo is severely underused, but understandable due to the length of the story, which hits stress levels by the end. Yusuke Santamaria plays a despicable creep, which surprises because Japanese dramas and movies aren’t particularly easy on journalists, and though the media is represented in quite the vulture-like way, Santamaria’s fallen from grace game designer takes the cake.

It’s a pity this is labeled as Utsumi’s “last case.”