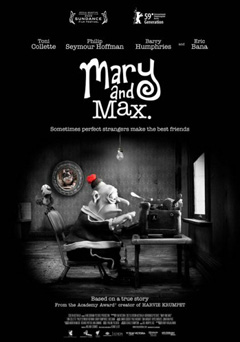 Mary and Max is a little Australian animated film released earlier in the year with the voices of Toni Collette, Philip Seymour Hoffman and Eric Bana. However, you hardly pay attention to their voices as soon as the story takes you inside the lives of the characters they’re voicing.

The film tells the story of a little 8-year-old Australian girl named Mary who strikes up a very unusual friendship with a 44-year-old Jewish American man living in New York named Max. Despite being physically different and being in different continents, both feel a certain disconnect – willingly or unwillingly – with the world around them and find a degree of comfort in being pen-pals.

The story of their lives and relationship spans 20 years, and in a sense feels epic. It isn’t a single moment that shapes these characters, but a combination of several of them. We get to see Mary as a little girl growing up, going to college, and even getting married. It is a story that could pretty much be told in a live action drama, and this is why its story should be even more poignant. Few animated films deal with the stuff that this film deals with, so I wonder why so few people are paying attention to this.

Oh, yeah. This isn’t a bubbly piece of animation, maybe that’s why.

This is probably one of the best animated films of 2009, yet it will probably be ignored due to the lack of promotion by its own studio. I wouldn’t even know this was out if I hadn’t heard about it online.