I watched this film by myself in a Starbucks, earphones pinned close. Bad idea if you want to get the twinkling sound of a demonic ringtone out of your head. From the first death onward, this movie had me sitting on pins and needles. I’m sure everyone around me was convinced I was watching a ransom video or something because I was so tense I couldn’t do anything but cross my arms and hold on tight. As far as I’m concerned nobody builds suspense and terror quite like the Japanese. The amount of detail that goes into every single moment of a horror film is testament to just how bold and how in love with filmmaking the Japanese are. One Missed Call gets to you because it takes something very commonplace and turns it into a tool of fear. It’s never been more pertinent for you to answer your phone when it rings than when the entity on the other end is you telling yourself exactly how you’re going to die.

Okay, Clive Barker. What the f*ck? I’d read The Hellbound Heart before watching this movie, and even reading about the Cenobites was enough to make me sleep with the lights on. Actually seeing them fully realized and rendered the way Clive did on the screen kinda made sleep nonexistent. He’s obviously an author with a very exacting and precise imagination, because I don’t think anyone else could’ve envisioned the type of monsters he did and then put them on screen. Hellraiser is gruesome, a mindwarp that will make even the most hardened horror fan a bit squeamish. As much as I wanted to shield my eyes away from the nightmare, I just couldn’t look away. 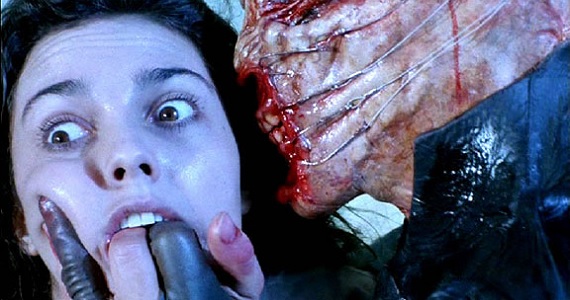 Who doesn’t love a good haunted house story? The demons in this house certainly leave an impression. Especially when the history of it is so rich and so dreadful. Telling the story of children suffering will always cause shivers no matter who you are. The pain inherent in losing a child, and losing a child to something as dreadful as this film portrays not only makes the heart hurt, it makes the soul tremble. Having to come back to the home in which such evil happened to confront your demons makes it even more harrowing.

The next two films are always talked about in whispers among older horror fans. Wes Craven is certainly a delightfully cruel bastard for making the The Hills Have Eyes. It was like a psychedelic experiment gone wrong, only the sufferers of this chemical trip have to find a way to survive at all costs. The things this unfortunate family goes through, just because they want to take a shortcut to get to LA, are horrendous. Even if they were warned against it multiple times and still ignored the locals, one would never wish what these people had to go through just to get out of it on anybody. If this film does nothing else it teaches you to listen to people when they’re trying to save you!

Before Wes made The Hills Have Eyes, he decided to have us explore the horrors a little closer to home, quite literally. He has a thing for families suffering for their frivolity, doesn’t he? In this scenario, the girl is just across the street from her house when she’s being tortured and killed. I found myself screaming at the screen, begging this poor child to find her way home, admonishing the police for not even investigating the strange car in front of her house–WHICH THEY JUST LEFT, FOR CRYING OUT LOUD! The entire film was both frustrating and heartbreaking. If these two films don’t warn you off seeking cheap thrills, then you obviously have a death wish.