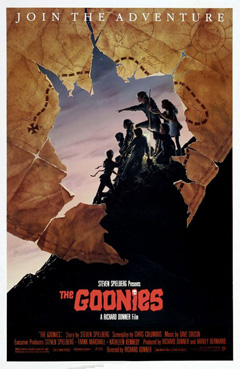 You know when you rewatch old movies, and all of a sudden you start pointing out at people saying “OMG, it’s Sam Gamgee,” all the way into the “OMG, it IS really Joe Pantoliano.” That has been my last realization after re-watching The Goonies over the weekend.

We’ve all come to grow up with Spielberg’s magical touch, be it the wonderment of watching dinosaurs become alive on Jurassic Park, the magical touch of E.T., or, yes- the exciting adventure of finding a pirate’s treasure in The Goonies. We even grew with the mischievous adventures of Columbus’ Home Alone, and okay- Columbus did spark that magical flick of the wand with Philosopher’s Stone. When the both mesh together, they seem to create an earthy off-this-world adventure.

The Goonies tells the story of a neighborhood in the brink of being bought off to become part of a fancy Country Club. On the final days of the paperwork, Mikey (Astin), his talkative pal Mouth (Feldman), the inventive Data (Quan), the imaginative Chunk (Cohen), and Mikey’s older brother Brand (Brolin) find a treasure map said to belong to One-Eyed Willie. Intent to help their parents with the finances of the whole neighborhood, the boys — to the reluctant Brand — decide to go on a treasure hunt that will lead them into a face to face encounter with the dangerous criminals known as The Fratellis (Ramsey, Pantoliano and Davi).

Murder (in a rather comical situation) is present, as well as some kissing scenes and some scary moments abound, but nothing kids can’t get over it. I actually saw The Goonies twice in a row and some of the audience reactions was very comical, but that may be due to Cohen’s on point interpretation of Chunk, who got the most laughs from adults or kids. However, one thing remained unchanged: We all thought it was a very long movie- the third act, while quite dynamic, was reaching when children began yawning and parents started to complain it was pretty unusual for a film to hit the 2hr. mark. Even on my own run of the film, I had lost a little bit of interest.

Though Astin had to carry the film without turning to his comedic abilities doing most of the worrying and pep talks, unlike Cohen, Feldman or Quan who did have most of the comedic moments of the film, and Martha Plimpton played a rather minor role- like a sidekick’s sidekick – with some really great banter with Feldman, all of the characters felt balanced. A feature that is always a challenge with so many minor characters.