Okay, this is actually one of the funniest, most putrescent horror films I’ve ever seen. I love when the genre melds comedy and horror so flawlessly. After all, as many actors, writers, and directors will attest, there’s a very fine line between horror and comedy. The things we laugh at are oftentimes truly horrible out of context. But Re-Animator manages to make even the most ridiculous seem plausible–another instance of humans being hell-bent on playing God. The styling of everything from the images on the screen to the dialogue had me nearly crawling out of my skin, but at the same time I just couldn’t stop laughing. A truly entertaining film. 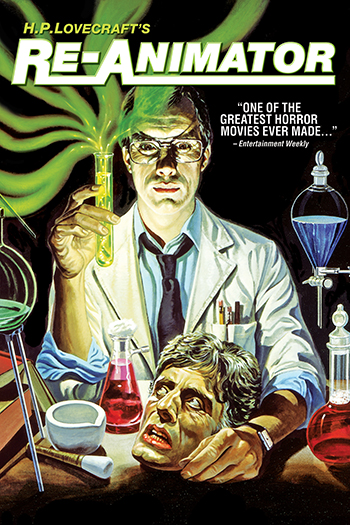 Unlike the film before it, Nightbreed delivered all the gross and none of the giggles. There were, of course by virtue of the time and the genre, the occasional chuckles, but really when you watch a man literally cut his face off and present it to someone as tribute, it kinda takes away from the laugh factor. That being said, this 1990 gorefest really was a lot of fun to watch. That shouldn’t suggest, however, there wasn’t something truly poignant about the film. It’s the classic battle between good and evil in which you’re not really sure which side is which. For most of the film, I found myself on the side of the demons of Midian, who only wanted to protect their home from those who’d rather see them destroyed to avoid confronting the horrors that lie just beneath the prettiness of their lives. Even in moments that seemed over-the-top, I couldn’t tear my eyes away!

Along my horror-watching journey my father introduced me to some true gems that sort of flew under the radar, or at least never got as much respect as they probably deserved. Willard is one such film. We rented it mostly because the film’s sequel, Ben, featured a very famous theme sung by Michael Jackson–which I obviously adored growing up. It was only right that before I touched the sequel I should see what spawned it all, and man was I pleasantly surprised. Coincidentally, I was introduced to Willard at a time in my life when I felt very much like an outcast, like I was always either looked over or ridiculed because of how I looked. (Kids are terrible; spread the word!) Thus my connection to the titular character (played by Bruce Davison) went a little deeper than just liking the character for all his flaws. What really stuck with me through the years was the very last thing Willard ever says as Ben eventually takes over: “I was good to you, Ben!” Coupled with what actually happens in the end, that scene just haunted me from the moment I saw it to this very day.

Okay, so eventually M. Night Shyamalan lost his way a bit when it came to filmmaking. But no matter how much anyone wants to dump on the man, no one was ready for that ending in The Sixth Sense. This film proved how much of a student of Alfred Hitchcock Night is. His ability to build a story around a central theme, then exploit that theme for a jaw-dropping twist at the end really does speak to how much he cares about story (or at least in his prime when his films’ nuances were still relatively fresh). The entire build-up of the film, the subtle hints here and there, the use of sound and light to create atmosphere so when the scare came it was both satisfying and horrifying makes this one that will stick with you no matter how long it’s been since you’ve watched it.

The first in this franchise set the tone for the absolute craziness that would be its sequel. Gremlins 2: The New Batch took the basic principle of its origin story and blew it up to an overexaggerated heap of muck, slime, and just obscene amounts of fun. It’s comicbook gory, that is the gore in it is just so over-the-top and comical it doesn’t even bear consideration as offensive. What made the sequel so much better than the first film was just how far Joe Dante, Charles Haas, and Chris Columbus were willing to go. Right before the ’90s and just as the ball dropped to introduce the decade everybody had this stylized, larger-than-life ideal of what it would be like: all loud colors, sharp angles, and bigger everything. Gremlins 2 captured that ideal and magnified it, producing one of the most fun horror films I’ve ever seen.