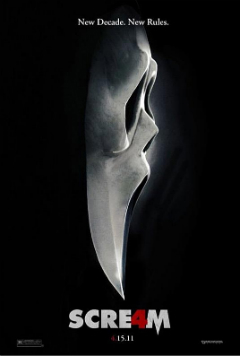 “What’s your favorite scary movie?” once again becomes immortalized with fear as Wes Craven brings back one of his most appealing and constantly changing mass murderer, Ghostface, in his latest film, Scream 4.

After an unfortunate reception of his previous release, My Soul to Take, Craven makes a major comeback with this sequel; the fourth film in a line of one of his most famous series. Now, you’d expect it to be pretty terrible with the way both the second and third movie went, but Scream 4 truly catches its audience by surprise especially fans of the original Scream.

The film introduces Sidney Prescott (Campbell) who has just arrived back home in Woodsboro after finishing the tour for her new self-help book. She reconnects with her family and gets in touch with fellow survivors of the original Ghostface massacre: Dewey Riley (Arquette) who recently became sheriff and Gale Weathers (Cox) who retired from reporting to marry him. Sidney’s return, marking the fifteenth anniversary of the massacre, also marks the return of Ghostface to Woodsboro. This time around, the killer is recreating the events from the incident while also filming the murders, slowly but surely taking out high school students. Once the people closest to Sidney are targeted, she’s pushed back into her dark past, while Gale is pushed back into her favorite pastime: trying to discover the killers identity.

Scream 4 is a slasher flick, but not at all your average one. Just as its predecessors didn’t take themselves seriously, this sequel pushes itself to an entirely new level of meta, even bringing in Kristen Bell and Anna Paquin at the start in a faux film to have a conversation about just how self-referential the series. The film can be seen as a satire of itself and other horror movies, bringing up Psycho and A Nightmare on Elm Street among many others, but still maintains its suspenseful mood.

Campbell, Arquette, and Cox all bring some great performances to the screen, just as they’d done before, but the one person who stole the screen was Emma Roberts – who is best known for her role on the Nickelodeon show Unfabulousand as the niece of Julia Roberts. Although she has been blamed of bland performances, Roberts shows her true potential in this film as Jill Roberts, Sidney’s cousin who is tangled up in the Ghostface murders.

The mixture of laughs and scares in this fourth installment is what makes Craven’s movie work best. Although some of its reviews have called it underwhelming, it’s plain to see that Scream 4 is one of the most entertaining horror films of the year, as well as the best film of the series since the original, if not better.