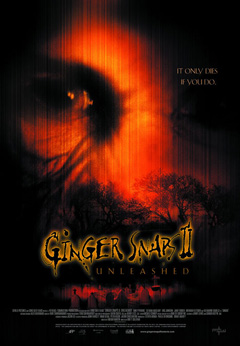 A couple of days ago, I asked people to tell me a number between 3-379, Camiele came and suggested #142, which was Ginger Snaps II. Set right after its original 2000 flick, Ginger Snaps (which had Ginger (Isabelle) snapping), re-watching Unleashed after so many years without watching either of the films (or subsequent films) was an interesting memory experience. It was like watching the movie for the first time and having only heard spoilers of the movie. I don’t really recommend it, so if you plan to watch Ginger Snaps: Unleashed, I suggest you begin where you should.

The Ginger Snaps trilogy (that everyone wants to just be two movies, or even one) holds a special place in the hearts of horror fans. Though severely under-budget, even if I heard Ginger Snaps II had more budget than its original (the numbers don’t back me up [1]), the look and atmosphere in here is impressive given its constraints. This cost a bit less than half of what Juno had [1], and the production had a LOT more to do, including a full-size (wonky) werewolf, construction of a house, prosthetic pieces and loads of fake blood. However, what everyone loved about its treatment of lycanthropy was the metaphor of sexual awakening, especially embodied by Canadian film staple Katharine Isabelle.

When we left Bridgette (Perkins) in Ginger Snaps, she had just been infected by her sister’s lycanthropy virus and had been treating herself with Wolfsbane (or Monkshood, if you know your horror Wiccan Harry Potter lingo) to slow down the transformation. In turn, Bridgette seems to be sexually repressing herself to hold off her “animal” instinct that threatens to take over her just like it did with her sister, who has invaded Bridgette’s defeatist subconscious.

In typical horror fashion, in an entertaining cameo by Brendan Fletcher, Bridgette ends up at a facility where she’s been treated for substance abuse. That’s where she meets the strange, Ghost (Maslany), a girl obsessed with comic books [PLUG: The Fangirly Diary of a Geek Girl] and attending to her burn-victim grandmother Barbara, and an array of other patients (including Michelle Beaudoin [1], Jenny from Sabrina the Teenage Witch!), all tended by head of the facility, Alice (Kidder), and the pervy male nurse Tyler (Johnson).

Though Ginger Snaps II has a great start (considering the great ending in Ginger Snaps), it dissolves into character inconsistencies that make our female lead, Bridgette, seem a bit less assertive — especially trusting too much in the seemingly weird Ghost. Canadians love young sociopaths in their entertainment! However, I guess those inconsistencies are what drive the film to its saddest resolution with some great acting by both actresses in that final scene. Come on! You have to admit it was sad seeing Bridgette groping to the last strands of her humanity, asking what an honorable lead would ask for.

Overall, though, I wouldn’t normally recommend Ginger Snaps II unless you really loved the first one, and even then, it probably doesn’t come close to the interactions in it. They both deal with different themes in very different ways, while the first one deals a lot with Ginger’s sexual awakening and the sisterly bond — which is always great drama — Unleashed seems to go darker and is much more straightforward with its horror metaphors (sexual repression, substance abuse?). Even Bridgette’s werewolf transition seems to be problematic and a lot less alluring than her sister’s.