Oh, Cronenberg, you mad genius! It’s no surprise I’d have more than one David Cronenberg film on this list. The man is a visual maven, using sound and imagery to get his point across. Within the first few scenes, Scanners blew my mind… no I’m serious, the mind blowing is very literal. How it all unfolds is just so unsettling, uncomfortable on the skin. Even if you had no idea what the film was about or what was about to happen, you just knew whatever was taking place was equally painful and frightening for the man having to suffer through it. The acting alone was chilling enough to keep me gripped. When you had the makeup and the use of special effects, I found myself leaning away from the screen more than a couple times.

This ’70s remake of the 1956 classic really did leave me on edge from scene one. First of all, I have this fear of slime and mucus that dates back to elementary school. The viscous nature of it, the stickiness, the way it crusts over and stretches and pretty much leaves streaks of itself everywhere…. I’m getting goose bumps just thinking about it. So when splatters of mucus decide to grow into actual flowers and pods, birthing perfect physical replicas of the human race, my phobia just skyrockets. Thanks a lot, Mr. Kaufman!

There are definitely times when I stumble across a film and wonder what I was even thinking watching it. But, as we all know by now, I’m such a fan of psychological horror that I couldn’t help myself. Yet again we’re dealing with the subject of being an idol. However, this time we’re approaching the subject during a very slow period for pop music in Japan in the late ’90s, thus the push for idols to expand into other areas to keep themselves (and their agencies) happy. Unfortunately, a relative lack of interest in pop music didn’t mean the cessation of overzealous stalker fans. It just meant it was easier for them to get what they wanted in however way they could get it without being noticed. I don’t want to spoil anything here. Perfect Blue is just one of those films you have to see to believe. Brilliant storytelling, a film that reaches into your mind and twists it until you’re not even sure what’s going on anymore until the wild climax. 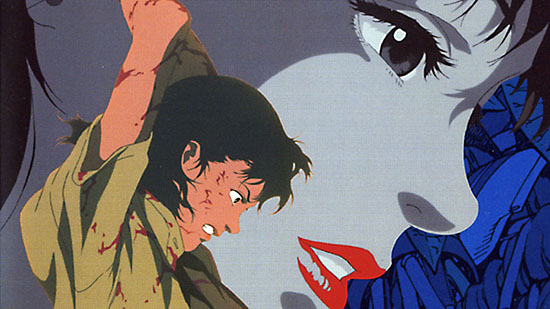 Honestly, you can’t go wrong with John Landis. The man has so much fun with whatever he makes, and it translates to the screen. An American Werewolf in London had the first actual werewolf transformation put on screen, compliments of genius special effects makeup artist Rick Baker, and gave moviegoers something both brutal and hilarious. It was one of those films that caused a lot of confusion when it first came out. Luckily, I had the fortune of seeing it without all the hype surrounding it much later, so all I got was a truly marvelous viewing experience. It helps that my introduction to anything John Landis did was “Thriller” by Michael Jackson. Yeah, I know, but the two stories are actually so similar it’s almost the same… right? In any event, the transformation and the scene in Piccadilly Circus are so fantastic I’ll never forget them and doubt I’ll see anything quite like them again.

Of the horror cinema from Hong Kong I’ve seen I have to say this is the most surprising. I don’t know what I was expecting, but it surely wasn’t a love story cum vampire movie! The lengths to which people will go for the ones they love is truly astonishing. And although not particularly my favorite Hong Kong horror stylistically, emotionally it ranges near the top. There were so many elements to the film–demon possession, hauntings, vampires–that Rigor Mortis could’ve easily become just a hodge-podge film with no real center. But there’s so much heart in this film it’s so much more than horror, and I think that’s what impacted me most of all, just how poignant this film is and how far it goes to teach its viewers about the frightening power love has.