While I don’t profess to be any sort of expert on horror from Hong Kong, I can say without question this is the most visually disturbing shit I’ve ever seen from the country! I don’t even know how to properly convey just how… just…. This may be the only film on this list where I can’t exactly say much without a) giving away too much, and b) getting physically ill. Oh, I absolutely ADORE the film, but, yeah, can only watch it on an empty stomach and in broad daylight. Just think a very twisted version of soilent green.

There’s nothing more disgusting yet heartbreaking than seeing someone literally fall apart in front of you–skin, ears, limbs. I watched the original 1958 Vincent Price version of this film, and the sheer camp of it both made me love it and roll my eyes throughout most of it. The opening scene alone made laugh out loud and say to my cat, “What the hell?” Then in 1986, my favorite visual psychopath David Cronenberg got involved, and the story took on an entirely new life altogether. Jeff Goldblum and Geena Davis played off each other like magic (it helps they were actually dating at the time), and the story unfolds in such jarring reality I was honestly emotionally invested until the credits rolled. That’s not to suggest, of course, I wasn’t a little ill while watching it the first time–decay of the flesh is always unsettling and disturbing to watch. But The Fly is really nothing short of a masterpiece.

And the string of grotesque and nasty keeps on coming.

Before Peter Jackson directed one of the most beloved franchises in the past twenty years, he was a young kid with a camera trying to see how far he could push himself and the boundaries of film. Needless to say one doesn’t eat or drink anything creamy while watching this one. As a matter of fact, just keep food far away from this movie. I learned that the hard way when I saw this movie for the first time. As gory as it is laugh-out-loud hilarious, Dead Alive is probably one of the most creative films just in the scope of its ridiculousness. 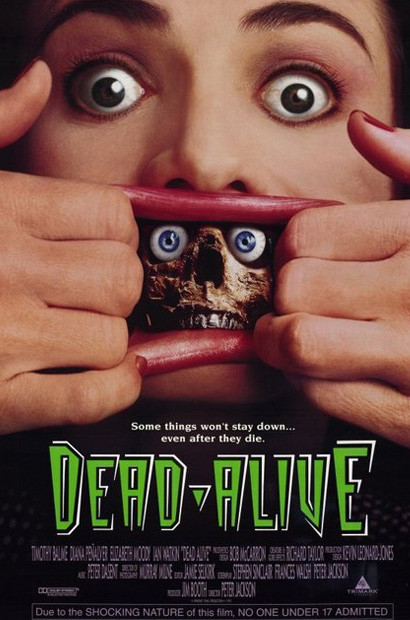 And just when I swore Dead Alive was the epitome of horror-comedy, Simon Peg stood up with a few words on the subject. If you don’t think Shaun of the Dead is one of the greatest zombie films of all time, I don’t trust your judgment. I don’t think I remember a time I laughed so hard and yet was so disturbed. British humor is on a new level of truly ridiculous. Dry delivery mixed with just an obscene sense of humor. You can’t go wrong. But just as much care was taken with the actual horror aspect as the comedy. The gore was just delicious, the zombies were actually frightening, and the ever-present impending sense of doom scratching at your back was thick. I can honestly say with all sincerity Shaun of the Dead is one of my favorite comedies of all time, and it certainly deserves its spot on my list of frightening films.

As much as I’m a sucker for good, clean psychological horror, man do I love me some flash and style. And as this part of the list will attest, I just adore me some David Cronenberg, the veritable king of flash and style. Beyond the visual mastery of the piece, Videodrome focuses on the moral conundrum society has dealt with for as long as television has been a staple in homes: trying to justify our own violent impulses while admonishing violence when it comes on the screen. At it’s core, the story’s simple, but the plot is complex and literally skin-deep. We become what we watch, essentially. There’s no escaping “the new flesh,” no getting away from what we truly are.