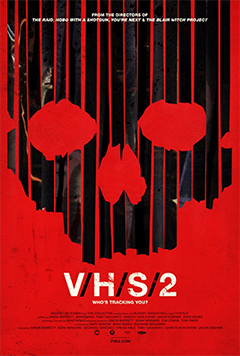 After a serious case of misfires from most of the shorts in V/H/S, another group of indie horror creators are trying their hand at making some sweet shorts. Some of them are back from the first (Wingard and Barrett specifically) and the rest are new to this game, but have made their own stand-out works. This sequel, simply titled V/H/S/2, is comprised of four short films by different directors stuffed smack into another one of Barrett’s frame stories; this one titled TAPE 49. It doesn’t really matter what happened between TAPE 56 from the first film and this one because the frame stories are always weak, but what really matters to the V/H/S films are the actual shorts included.

The first of the four comes in the form of Adam Wingard’s Phase I Clinical Trials. Considering his short film Q in The ABCs of Death was a brilliant piece of meta humor, the hopes were high for this opening piece. Here, Wingard is just plain all over the place. The eye camera concept is interesting enough as a set-up, but the execution itself is just plain disastrous. It tries to be a little funny while also trying to bump up the scare factor, but the moment the thought of that one Jessica Alba film The Eye comes up, one ends up overwhelmed with negative thoughts.

That disappointment is followed up by the exact opposite: a short film with interesting execution, but a fairly tiresome concept. Zombies are hard to do right, and everyone knows it, but zombies that are self-aware are even harder to pull off. Eduardo Sánchez and Gregg Hale’s A Ride in the Park is far from the bright sun-shiny day its title might imply. Shot from the POV of a zombie through a biker’s helmet cam, the directors have some interesting ideas that they play with, but ultimately the short ends up plain forgettable, mostly due to what follows.

All the praise in the world goes to Gareth Evans and Timo Tjahjanto for their V/H/S/2 segment. Not only is Safe Haven well acted, well thought out, and well put together, it’s really dang interesting and entertaining. Coming from the man who made one of the best action films of the decade, The Raid: Redemption, it should come as no surprise to anyone that this short film kicks the anthology flick into full throttle. Most of the fun comes in the way that the grounded short slowly unfolds into something rather insane, making it the best short in both films. Heck, if each short received its own rating, this would be the only one with a perfect five.

Following up something like Safe Haven is a tough task, but Jason Eisener – director of the terrific Hobo With a Shotgun and ABC’s short Y – handles it with another entertaining short. There’s something about watching a bunch of guys in alien costumes that’s just plain fun. It’s not necessarily scary, although it does ramp up the suspense a fair amount, but the idea that this slumber party interrupted by aliens is entirely caught on film by a camera attached to a dog is just plain great. It kicks off to a slow start, but you’ll be very satisfied (and a little sad) by the time it’s over.

Overall, V/H/S/2 is a step up from its predecessor. It’s still flawed in that half of the shorts pale in comparison to the other half, but Eisener, Evans, and Tjahjanto make it all worth watching for their shorts alone.