And now things are starting to get really serious. So let’s get right into it, shall we?

I’d heard talk about this film for quite some time but never actually got around to watching it until very recently. Of course Laurence Fishburne being one of my favorite actors, I almost had no choice but to give this one a watch. I don’t quite know what I expected, but it surely wasn’t on of the most enthralling science fiction films I’d ever seen. The sense of paranoia, how an actual ship can pull the darkest parts of you from your soul and hold you hostage was so chilling, my mouth hung agape for most of the film. Brilliant story line, and the characters were so rich, the connections between them so emotional, so powerful. Every loss left a scar that would probably never completely scab over or fade. 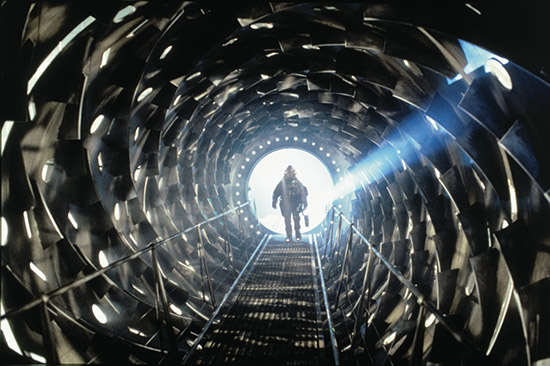 Quite frankly, being raped by the Devil and being forced to conceive his child while being held hostage by a satanic cult doesn’t exactly sound like the best way to spend a weekend. As if that weren’t frightening enough, your own husband doesn’t believe you, even seems to be in cahoots with the elderly couple attempting to force you into pushing out the literal spawn of Satan. The camera angles heightened the feeling of claustrophobia as the world closed in on Mia Farrow. A true classic.

I first saw this in a nickelodeon in Pittsburgh with a live rock band. So probably not exactly the same as it was in the 1920s, but still the film made a lasting impression on me. Count Orlaf is one of the most terrifying creatures I’ve ever seen. After seeing Nosferatu it was hard for me to accept any other type of vampire–all cute hair and sparkly skin. Orlaf was a vampyre (note the spelling) in the classical sense, a true creature of darkness, a face that looks like it came from the deep sea, and a soul as dark as the coffin he rises from. This is surely what many during the European spread of the Bubonic plague must have seen peeking through their windows when they told tale of hideous monsters sucking the blood of the innocent.

Really, the title alone is legendary. This film did more than just deliver on the gore and violence. At its core it made you question the actual morality of the people running the show, namely the teachers and parents who were okay with this type of depravity. Yes, kids are actually terrible. There’s no denying that. But their punishment for it was a bit extreme, especially coming from people preaching about morals and what’s right and wrong. More harrowing is the idea that even if you’re just trying to get through high school you’re still forced to dig inside yourself to find that dark place that would kill to survive. The best horror makes use of human emotion and makes the viewer question the direction of their moral compass. Battle Royale did that and more.

It’s become abundantly clear in film’s history that any movie where children are the focus is either cloyingly sweet or bone-chillingly horrific. This black-and-white film, just as Rosemary’s Baby, envisions the literal birth of evil, but in this case we actually see the result–a race of children that are cold, uncaring, and 100% logical, even if that logic causes the pain and even death of others. The imagery and very liberal use of metaphor in this film is really just fantastic, and the film’s eventual ending is so well done I was actually breathless for a few minutes afterwards.