And here we get into the gross part of the list. Films 60-41 are mostly some of the most gratuitous, goriest horror films I’ve ever seen. Why I love these films I have no idea, but at the halfway mark of the list, it’s about time things get a little messy, don’t you agree?

Without a doubt, Quentin Tarantino is one of the most polarizing filmmakers in the business. With his love of all things roadhouse and a penchant for his characters to be some of the most morally bankrupt human beings in existence, it makes sense. However, love him or hate him, the man knows how to entertain. From Dusk ’til Dawn is one of those movies that manages to actually force the viewers to assess their own moral compasses. On the one hand, you have an entire hoard of blood-sucking demons who use seduction in the form of snake charmer and all around goddess Selma Hayek to lure unsuspecting criminals and rapists to their den. Then you have our two main characters: George Clooney playing the damaged yet incredibly charismatic thief, and Quentin Tarantino himself playing the madman rapist. Ultimately you have to wait ’til the sun comes up to realize who’s really good and who’s truly evil.

Yeah, I can’t even properly put into words just who crazy this film is. Indonesia’s answer to The Texas Chainsaw Massacre, Macabre is the type of movie you watch to warn people off picking people up on the side of the road. Of course, if you’re in a group of friends, you’re bound to have that one that must get laid at all costs. Strap him to the seat and cover his mouth in duct tape, because his raging libido is going to land you all in a world of hurt. Macabre does exactly what its 1970s American predecessor does but with a sleek sophistication that makes it all the more unnerving. The mother is beyond gorgeous with a voice that could melt you like butter. But Mother Dearest here is actually the epitome of evil, the mastermind behind the night of pain and torture our unsuspecting band of friends are wrapped in until the very last moment of the film.

One of the first anime films I ever saw… in middle school. I suppose that informs my taste in anime, seeing Vampire Hunter D in middle school–granted sneaking to watch it because, yeah, no twelve-year-old needs to be watching a movie like this. A graphic, sex-filled little romp through post-apocalyptic Japan, this movie remains one of the most intense film viewing experiences I ever had a child. If I were looking for a way out of my never-ending cycle of horror, this was not the film to do it with. There was almost no respite from the sex, blood, and gruesome imagery from the moment the film started.

Another film whose smaller moments would haunt me forever. Of course, I’m a softie when it comes to babies and pets. This film, of course, would have both and feature them getting killed and resurrected by a desperate father. Most Stephen King adaptations predating the ’90s were overall pretty fantastic, following the books almost to the letter and putting on screen the nightmares King manages to paint on page. Pet Sematary was another one of those films “under the radar” my father introduced me to. Obviously it made a lasting impression on him, and with good reason. It’s not always easy to tell a ghost story. Of course, if there’s anyone to get the job done it’s Stephen King.

Gotta hand it to Disney. They sort of went for the jugular in all their animated films pre-’90s (what many dub the “Golden Era” of Disney). Though their films throughout the decade did feature some pretty harrowing scenes, nothing quite beats just how twisted they were when they adapted Grimms’ Fairy Tales to the screen. Never mind the premise of the story is this jealous ice queen plotting ways to murder her step-daughter, it features probably one of the more terrifying on-screen transformations. The queen turning into an old hag, her voice becoming as gnarled as her features, then the poisoning of the apple itself–the thick green goop dripping down in the shape of a skull, leaving zero to the imagination as to what its purpose is. Don’t pretend you wouldn’t screech if you saw this gnarled old lady standing in your doorway unannounced. Snow White and the Seven Dwarfs really did pack in a lot of terror in those 80 minutes. 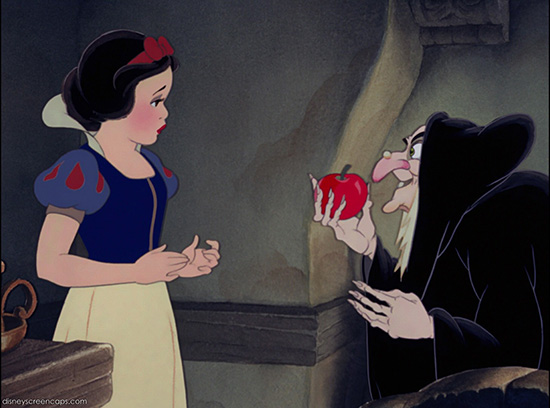